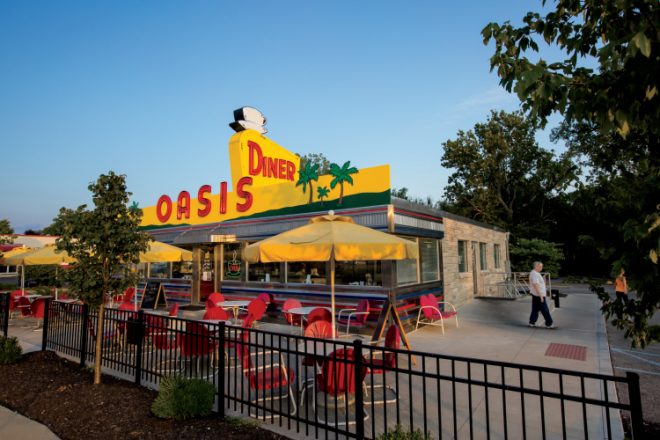 It’s hard to imagine that the 1954 eatery, which now serves thousands of loyal customers each week, sat empty less than a decade ago. In 2010, Indiana Landmarks placed the diner on its 10 Most Endangered Indiana Buildings list.

Thanks to the efforts of two local businessmen, the structure received a second chance, much to the popular approval of the people in the Indianapolis area.

The building’s revival began in 2010 when Plainfield town officials contacted Doug Huff, who is involved with commercial construction, and his father-in-law Don Rector about relocating, restoring and reopening the Oasis Diner. The men were admittedly hesitant. “We had never co-owned a business or been involved in a food-service operation,” Huff says. 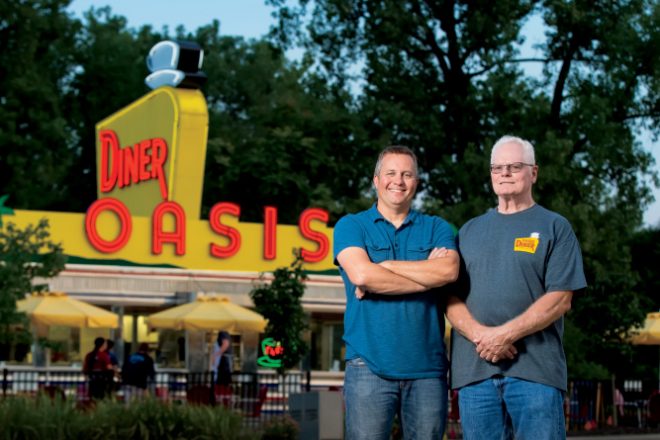 Aware of the statistic that 85 percent of restaurants fail within the first three years, the pair, along with the help of Indiana Landmarks and Plainfield town officials, carefully researched the possibility of fixing up and operating the diner.

Built in New Jersey, the diner had been shipped to Indiana in the 1950s and operated by a series of owners until 2008 when it was closed due to the then-owner’s ill health. Standing empty for two years, the building sustained structural damage.

After conducting a three-year feasibility study, Huff and Rector agreed to restore the diner at a new location, 4 miles west of Plainfield’s recently revitalized Town Center.

When Oasis Diner reopened in November 2014, the exterior and front part of the diner had been restored to their original appearances. “We kept the diner’s original pink and green colors on the original tile floor and walls but replaced the counters and seating to keep it fresh,” Huff says. A second room was added for additional seating, while a basement was established for storage and bakery needs. 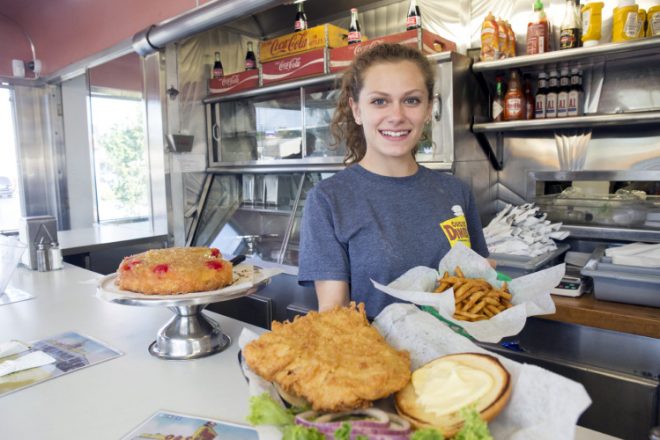 The Indianapolis country-fried pork tenderloin is one of the diner’s best sellers. Photo by Michael Tedesco

Servers, all dressed in the diner’s uniform of T-shirt printed with a retro photo of the Oasis, take orders from customers sitting at 18 bar stools, as well as booths and tables that accommodate 80. Outside patio seating allows for overflow crowds during warmer months, as the diner is open year round.

Breakfast lovers are happy to discover their favorite meal is served all day with the option to build their own omelets.

Taking advantage of the diner’s location, Huff and Rector named certain entrees on the menu for cities on the National Road, which passes through Indiana on its way from Illinois to Maryland: Kansas City loaded biscuits and gravy, Atlantic City stuffed French toast, and Indianapolis country-fried pork tenderloin, to name a few.

“The tenderloin is our best seller,” Huff says.

Customers can satisfy a sweet tooth with beignets, the sticky New Orleans fried pastry, cinnamon rolls, cakes and a dozen flavors of freshly made pies.

Another specialty is butterscotch root beer. “It is a hand-crafted, locally made soda sold exclusively at Oasis,” Huff says.

According to Rector, feedback from the community has been overwhelmingly positive. “Everyone loves that we saved a vintage diner from being destroyed. People who were kids in the 1950s come in to eat with their families and share their memories as they eat,” he says. 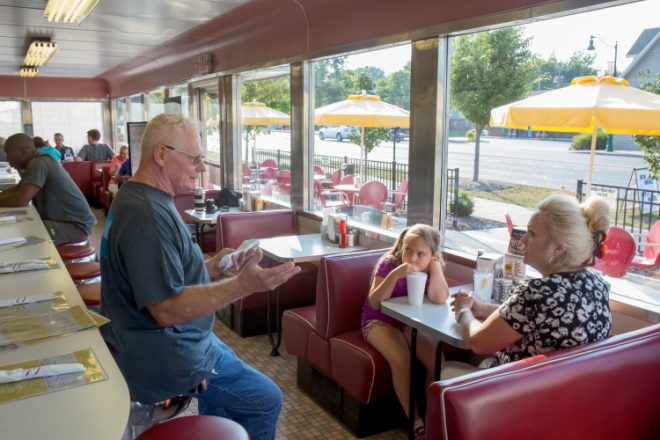 Neither Huff nor Rector had ever eaten at the Oasis prior to ownership. “By the time I moved here, the diner was closed,” Rector says. Huff had driven by the diner but never stopped. “I really wish I had eaten here,” he says.

Despite no personal memories, the men continue to strive for the diner’s future. As there is insufficient space for a drive-in, they offer carryout service. They also offer catering and plan to sell certain Oasis foodstuffs at local festivals.

However, when creating plans for the Oasis’ future, Rector and Huff strive to match the old with the new.

“We think long and hard before we do anything,” Rector says. “We may not go so far as to offer online ordering like some restaurants, but our customers know that what we do offer is high quality.”