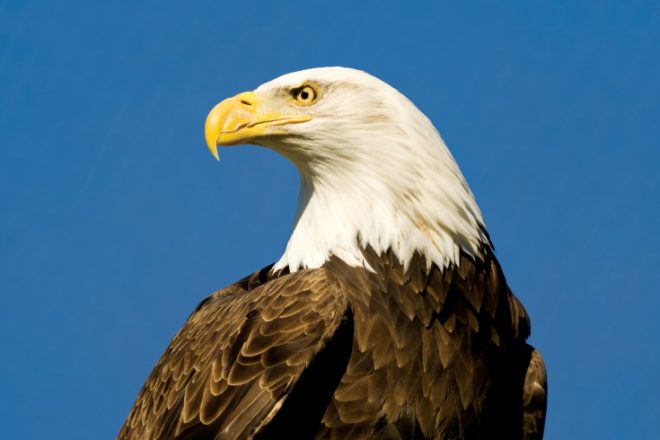 Few experiences compare to the wonder of spotting a bald eagle in flight. Thanks to Indiana’s bald eagle reintroduction program in the 1980s, there are lots of opportunities to see the once-endangered birds in the Hoosier State today.

Lake Monroe near Bloomington is one of the top locations in the state to see the majestic bald eagle, with around 300 documented species of birds in the region as well as year-round resident pairs of bald eagles.

“There are more than 15 active eagle nests on the property, and those pairs have had chicks hatch out so you can see immature eagles on the lake as the weather permits,” says Rex Watters, a wildlife specialist at Lake Monroe. “We also have migrant eagles here who have not yet nested, so your chances of seeing an immature or mature eagle are pretty good. The immature eagles don’t have the white head and tail until their fourth or fifth year. Between 5 and 7 years old, they have the full white head and tail, and at 5 years old, they are ready to mate and reproduce.” 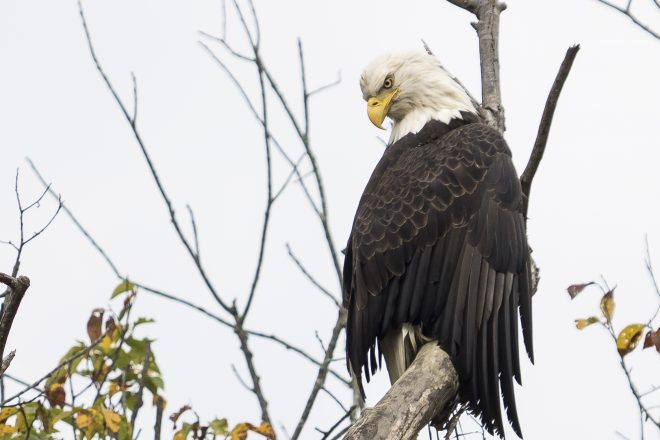 By the early 1990s, bald eagles had been completely gone from Indiana for nearly 100 years due to loss of habitat. The last native eaglet documented to have hatched in Indiana was in 1897. Then, in 1991, the first eaglet was produced as part of Indiana’s bald eagle reintroduction program. That program ran from 1985 through 1989, when eagles were brought to Lake Monroe’s “hack tower” from Alaska and Wisconsin in an effort to rebuild Indiana’s eagle population. “Hacking” refers to the process of taking eaglets from their birthplace before they learn to fly and releasing them in a new area, as eagles tend to consider the first place they fly to be home.

Find five more places across Indiana where you can witness bald eagles.

“Generally by February, eagles are on their nest sites. They lay eggs in March and hatch out in April after a 35-day incubation period,” Watters says. “The opportunity to see eagles at Lake Monroe peaks during migration times. January and February are good times if the ice is breaking up because they are able to feed on fish. You have to look at the ice conditions.”

In early spring, as soon as the ice thaws, a flush of birds comes back to feed on frozen dead fish that float to the lake’s surface.

“It’s like a frozen Banquet TV dinner for them,” Watters says. “One time we saw 40 eagles collecting food from the lake.”

November and December can also be good times to spot the eagles, Watters says, though it helps to have a boat for easier viewing. 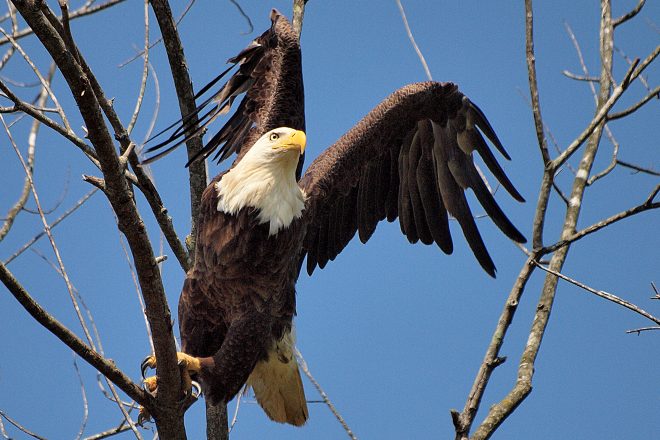 Jeff Danielson lives on the northern edge of Lake Monroe and has been photographing the birds of prey for eight years.

“I slid sideways into bird and nature photography after I bought my first digital camera in 2001,” Danielson says. “I bought one with excellent zoom to take photos of our son playing college soccer, and I found myself sitting at home with this long lens. Since we live out in the country, the rest followed naturally. Until I got my first good shot of an eagle in 2010, I’d not really thought it possible.”

Danielson says Canadian eagles over-winter in places like Indiana, and that, coupled with the lack of leaf cover, makes winter the prime viewing season from land or boat.

“In late spring and summer, though, the parents are more active hunting and fishing to feed their young,” he says.

When looking for eagles, Danielson seeks out shallow areas where large fish are easily spotted and caught.

“Like most predators, eagles are lazy and looking for easy prey. They couldn’t care less if the hunt is a challenge – they just want to find food for their babies at that point,” he says. “In the fall, you’ll see more mating behaviors and playful soaring. Juveniles are engaged in fun and games and practicing their skills. In June, you might get to see siblings testing their new flying skills with slow, low maneuvering.”