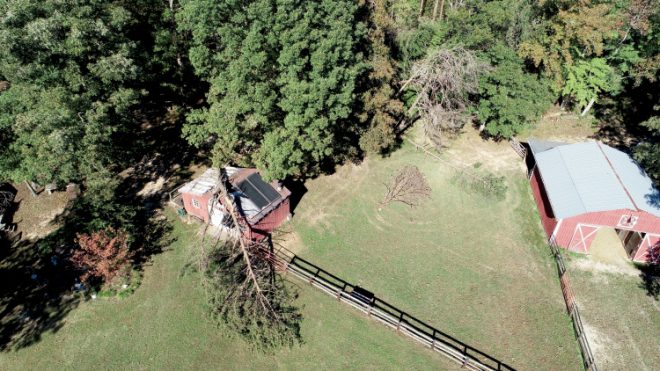 North Carolina was ravaged by hurricanes in late 2018.

On Oct. 10, 2018, Hurricane Michael made landfall in Mexico Beach, Florida, as a record-setting Category 4 storm. It caused devastation throughout the South including in Florida and Georgia. It also hit North Carolina, still reeling from Hurricane Florence.

“North Carolina Farm Bureau Insurance had most of their claims staff on the coast dealing with damage from Hurricane Florence that hit in September,” says Darrin Walton, IFBI’s executive director of claims. “Although Hurricane Michael came ashore in Florida, it was still strong enough to cause devastation in Georgia. The three states simply did not have enough staff to cover everything, so when they asked for help, we agreed.”

IFBI had scheduled claims staff to deploy to all three states through the end of 2018 on a two- to three-week rotation. North Carolina is dealing with more than 50,000 claims from Hurricane Florence. Its need for assistance was overwhelming.

“I wanted to help,” says Eric Mishler, field claims representative. “Four of us were in Greensboro, North Carolina. Each of us had different skills, so we were able to learn from each other while collaborating to help North Carolina Farm Bureau members.”

Hurricane Michael provided several state Farm Bureaus an opportunity to test a new program designed by IFBI. Georgia staff uploaded damage estimates of less than $15,000 into the estimating system, allowing claims staff from other state Farm Bureaus to access and process estimates from their home location.

According to Walton, “Several other Farm Bureaus took part in the program. As of Oct. 31, they had processed more than 3,000 estimates efficiently with a faster turnaround for the insured and at less cost to the company.”

“Every time a disaster occurs and the call goes out for help, I am overwhelmed by the responses of our staff to volunteer and help members of the Farm Bureau family, regardless of where they live,” IFBI CEO Joe Martin says.

“It is more than just those who are willing to leave their home and families for three weeks, it is also everyone who stays behind and agrees to take on the extra work so that we can help our sister Farm Bureaus. I know our sister Farm Bureaus would be there for us if we ever need them, but I hope they never have to reciprocate.”