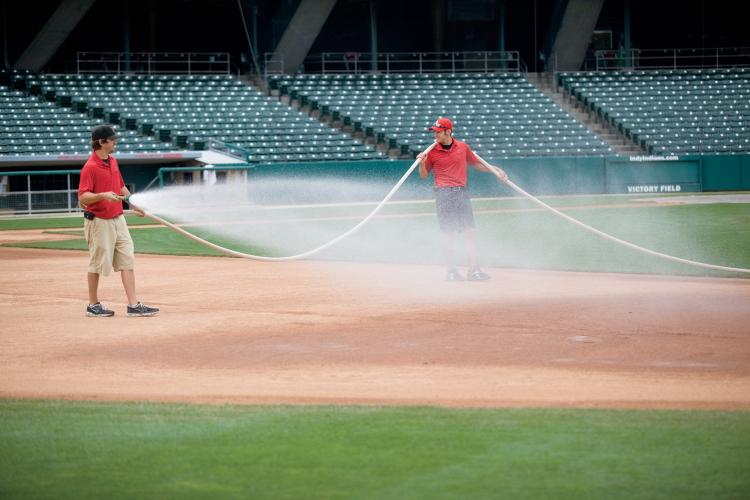 Long before fans file in to Victory Field to cheer for the home team, Joey Stevenson has spent hours doing some rooting, too – literally. As head groundskeeper for baseball’s Indianapolis Indians, Stevenson has the task of tending the turf – irrigating, fertilizing, mowing and maintaining the field so it’s in tiptop shape when the umpire shouts, “Play ball!”

It’s an art and science that he learned as a student in Purdue University’s turfgrass science program, and a skill he honed through internships with the Philadelphia Phillies and the Kansas City Royals before joining the Indians, the Triple-A club of the Pittsburgh Pirates, in 2007. But it’s an interest that stems from work on the family farm.

“I helped my dad and grandpa farm our 3,400 acres of corn and soybean fields. Now, I get to use agriculture techniques on a different kind of field,” Stevenson says.

As you might expect, the job includes maintaining the grass, but it’s really the infield dirt that requires the most time for a groundskeeper. “We have unique tools that we use to get the infield dirt the way we want it and to manage the moisture,” Stevenson says. “The goal is to create as perfect a ballpark as possible.” 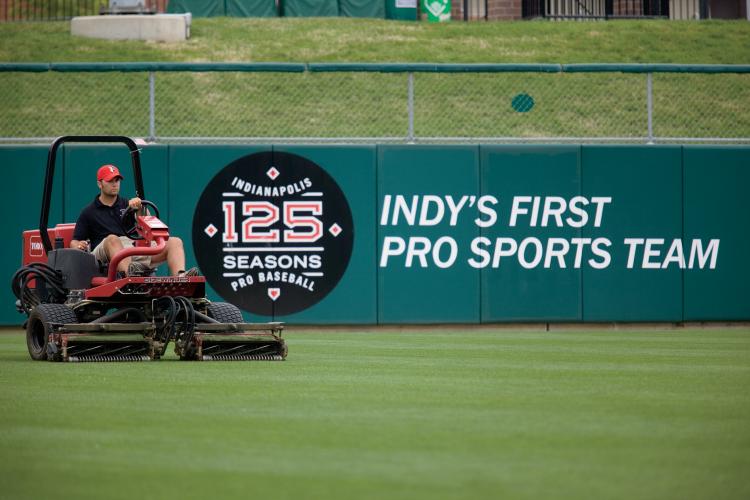 In that regard, Stevenson has hit a home run. Victory Field was named the 2011 Field of the Year by the Triple-A coaches, and Stevenson earned recognition as the 2011 Triple-A Turf Manager of the Year.

What does it take to be successful in the turf management field? Cale Bigelow, associate professor of agronomy at Purdue, says it’s a combination of technical plant knowledge, business acumen and a focus on customer service.

“Turfgrass science graduates work in varied segments of the green industry, like golf course and sports field management, as well as lawn care, where expectations for the results are exceptionally high,” Bigelow says. “Our program prepares them by offering technical courses in math, science and agronomy, plus we require a year of economics and business-related courses so that graduates have the sales, marketing, management and communication skills to be successful.”

Traditionally, pest management has been the most difficult challenge for turf managers, but now they face nutrient and water management issues more frequently, Bigelow explains. “The last two summers, we have had extensive droughts in parts of Indiana that have forced managers to be creative in conserving moisture.” That may mean using grasses that require less irrigation, re-evaluating pesticide use and employing additional practices that ensure responsible water management. For sports turf areas, this is very important because of the focus on a firm, dry surface.

Selecting the appropriate species for a particular area is another challenge. “What you grow in South Bend is different than what you grow in New Albany, and one size does not fit all,” Bigelow says. That means turf managers must consider geography, the amount of sunlight the turf receives, the desired appearance and purpose of the green space, and how much the customer is willing to invest in maintaining it. 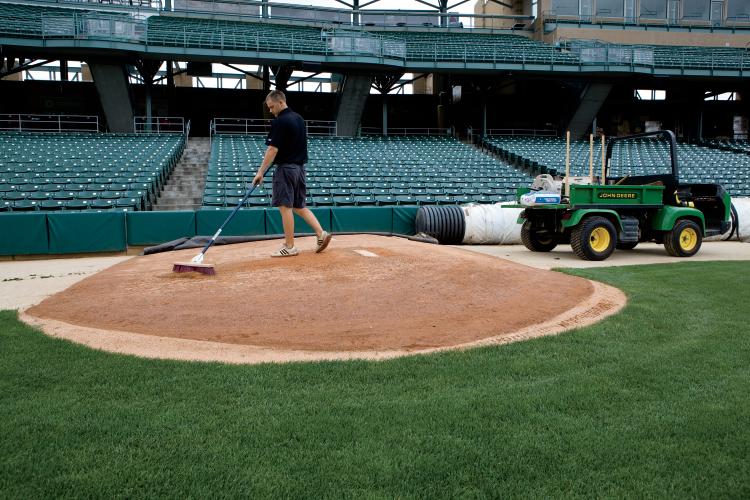 For Stevenson, species selection and water management are minor league challenges compared to the major ones he faced when the Indians agreed to let their field be turned into an event venue for the 2012 Super Bowl. It was a challenge that required the complete resodding and reworking of the field after the 3 million pounds of concrete and sand that covered the field were removed at the conclusion of the Celebrity Beach Bowl – and with only two months to accomplish it before opening day.

“We got a head start in the fall re-sodding the areas of the field that wouldn’t be impacted by the footprint of the tent being built for the Super Bowl,” Stevenson says. “The sod is a premier grass, Kentucky Bluegrass, but the infield position spots are planted with rye grass because it germinates faster, and we had a shorter time frame to get the field ready.”

It’s that kind of knowledge that serves a groundskeeper well.

“Studying turf science has greatly extended my knowledge of agriculture and has prepared me for a job that allows me to spend my days at the ballpark. It doesn’t get much better than that.”