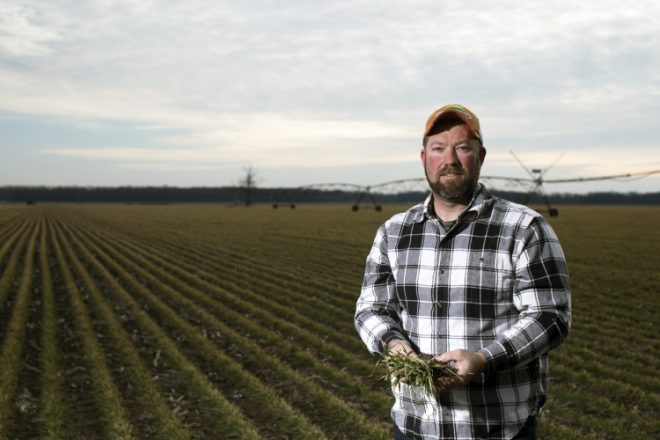 The term “winter wheat” seems a misnomer in Indiana, where almost every other crop thrives only in spring, summer and fall.

Yet Indiana farmers plant the equivalent of about 300,000 football fields of wheat in the fall. The crop grows several inches before it goes dormant in winter. By early spring, it greens up and grows again, offering a pleasant sight to any Hoosier who enjoys green fields in the spring and heads of golden grain in the summertime.

“I like having wheat out there,” says Scarborough, a third-generation corn, soybean and wheat farmer and president of the LaPorte County Farm Bureau. “It helps hold your soil, moisture and nutrients. I think it also helps with the corn yields the following year.” 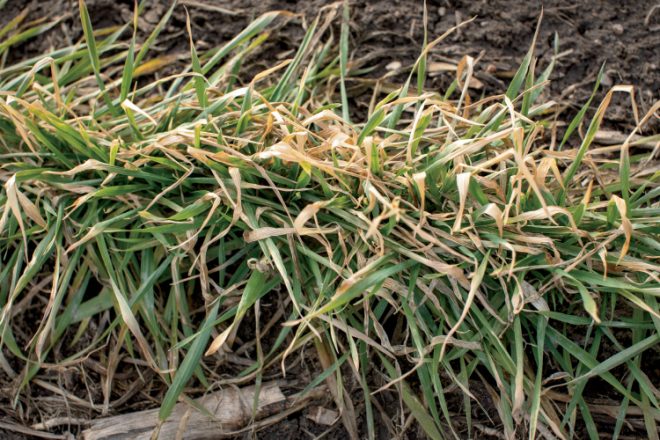 While its acreage is small relative to corn and soybeans, wheat ranks as the No. 3 crop in Indiana and provides multiple benefits for Indiana’s row-crop farmers. Indiana farmers grow a variety of wheat called soft red winter wheat that suits the state’s growing season. This type of wheat is sown in the fall for harvest in the summer (as opposed to spring wheat, which is sown in the spring for harvest in the fall). Flour made from soft red winter wheat is a common ingredient in cereals, cakes, pretzels, crackers and all-purpose flour.

Learn about the different varieties of wheat and what they’re used for.

Some Indiana farmers grow winter wheat strictly as a cover crop, which is a crop grown to protect the soil rather than to be harvested. Cover crops cover and protect the soil between cash crops to reduce soil erosion, improve soil quality and more.

Indiana livestock farmers may grow wheat for the opportunity to apply livestock manure during the summer without trampling a more profitable cash crop of corn or soybeans.

Farmers who grow wheat as a cash crop allow it to mature and then harvest it in midsummer. There is also a market for the wheat straw, so after harvesting the grain, farmers may mow and bale the dry wheat stalks so the straw can be sold or used as livestock bedding.

Because wheat is harvested so much earlier than corn or soybeans, it gives farmers the option to double-crop, which in Indiana means planting short-season soybeans into the field following the summer wheat harvest. These soybeans can then be harvested in the fall.

Scarborough chooses a practice known as intercropping, which means that he plants soybeans within actively growing wheat. This allows him to produce in two years in the same field the three crops – wheat, soybeans and corn – with the greatest production potential. 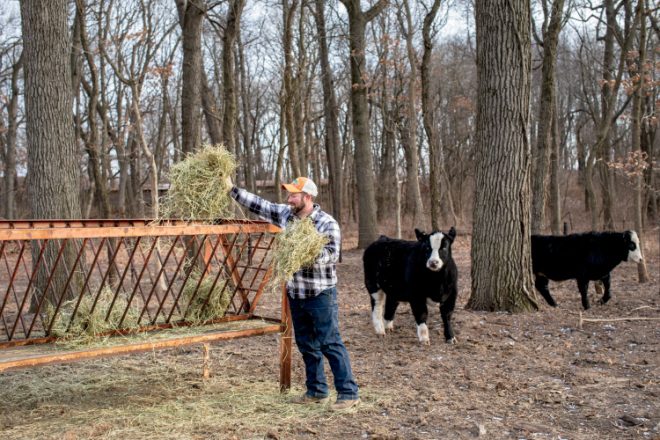 Scarborough grows seed corn, a crop that he harvests earlier than his commercial corn. The earlier harvest allows him to plant his winter wheat in mid-September rather than waiting until after the traditional commercial corn or soybean harvest in September and October.

Earlier planting gives the wheat a greater chance to grow and establish itself before winter dormancy, when Scarborough hopes for a blanket of snow. This layer of Mother Nature’s insulation protects the wheat from any prolonged cold snaps.

In March, Scarborough’s rows of wheat quickly turn green, and throughout its life, he cares for it with fertilizer and treats it for diseases and insects, as needed. In late spring, he interplants soybeans between the wheat rows, giving him four to six weeks of extra growth on his soybeans, growth that he wouldn’t have if he did ordinary double-cropping and planted after the July wheat harvest.

“Doing this increases our yield potential for soybeans,” Scarborough says. “We have more of a chance of getting better soybean yields when we plant earlier, and the soybeans are drier at the time of harvest.”