Freedom, Farming and the National Exhibit on Lyles Station 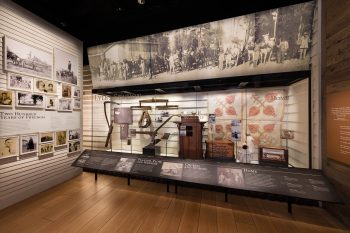 Thirty-five miles north of Evansville, the small rural community of Lyles Station quietly holds on to an important legacy. Founded by free black settlers in the first half of the 19th century, it grew into a thriving farm community boasting about 800 residents between 1880 and 1913, when families began moving away in the aftermath of a devastating flood.

Today, many Lyles Station residents are descended from the original settlers, and the Lyles Station Historic Preservation Corporation is working to safeguard and share the area’s history.

The National Museum of African American History and Culture in Washington, D.C., chose to highlight Lyles Station and the legacy of black farmers in its “Power of Place” exhibit. Indiana Farm Bureau member Stanley Madison, a fifth-generation Lyles Station farmer, was at the museum’s opening ceremony, and even donated his great-grandfather’s scythe to the collection.

“It was quite an overwhelming experience to be at the ribbon cutting for the exhibit,” Madison says. “It’s pretty awesome that we can bring the community of Lyles Station to a national level and represent those African-American farmers who were here in the early 1800s feeding the world.”

Other antique farming implements, historic photos and everyday objects such as clothing and a quilt give visitors just a taste of what life was like in Lyles Station during its prime. The Smithsonian has even included soil from the land of one current-day farmer whose ancestors plowed the same area before the Civil War.

Over the past century, African-American culture has become more and more tied to urban areas. Lyles Station and this national exhibit reveal a historic connection to rural life and to the land itself – and encourage visitors to explore the significance of the original farmers’ ingenuity, knowledge and accomplishments to African-American culture and Indiana history.