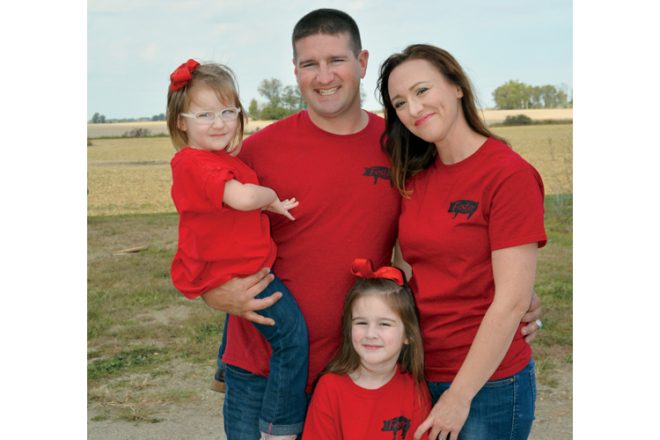 Dallas and Meggie Foster and their daughters; Photo by Kathleen M. Dutro

The winners of the 2016 Indiana Young Farmer Achievement and Excellence in Agriculture awards are proof positive that not everybody starts out by inheriting a farm.

Achievement Award winners Dallas and Meggie Foster of Hancock County knew even before they got married that they’d farm together someday. Both grew up on farms, but when they began getting their own hog farm up and running in 2006, they worked full-time off-farm, Dallas as a farm manager at a nearby hog operation and Meggie as a farm journalist.

These days, Meggie is the marketing manager at CountryMark Co-op, but Dallas works full-time on their farm, which has now grown to 600 sows (sows are adult female pigs) and around 1,300 acres of corn and soybeans. Most of their land is rented from other farmers, but in 2011, they purchased their first farm using the USDA Farm Service Agency’s Beginning Young Farmer & Ranchers loan program.

In their “spare” time, Meggie blogs at www.hoosierfarmbabe.com, where she writes about the farm, cooking and fitness, and busts some farm and food myths, while Dallas was recently elected president of the Hancock County Farm Bureau. 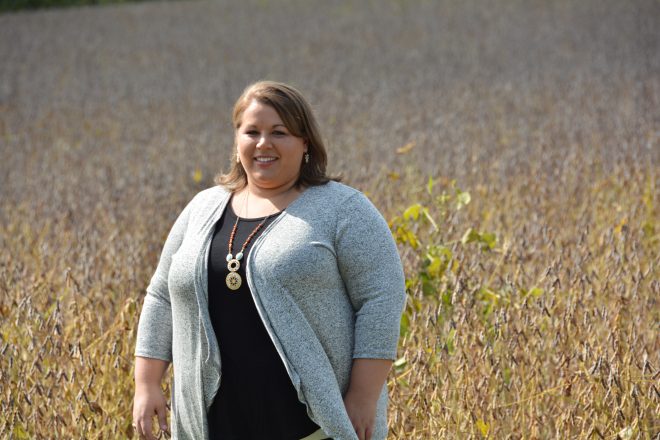 Deidra Gottbrath, the Excellence in Agriculture winner, has a full-time job as a stroke clinical operations nurse at a large hospital in Louisville, Kentucky, but she is still very involved in farming.

She recently purchased a few tillable acres on her own, harvesting her first crop from those acres last fall. She also helps her parents on their farm, and is the president of the Washington County Farm Bureau.

“My passion for nursing and agriculture are very similar,” she wrote in her YFEIA application. “I love science, I love helping people, I love teaching, I love learning and I love knowing that what I do positively impacts others.”

Even as she pursued a career in healthcare, she always knew she wanted to get back to the farm eventually. That timetable was accelerated when, after a tornado ripped through part of her family’s farm in 2012, her uncle decided not to continue farming. With her parents and other family members, she now helps raise 750 acres of corn, soybeans and popcorn.

The Achievement Award recognizes young farmers (age 35 and under) who earn the majority of their income from their farms. The Excellence in Agriculture Award recognizes young farmers who do not derive the majority of their income from an agricultural operation they own but are still actively contributing to and growing from their involvement in Farm Bureau and agriculture.