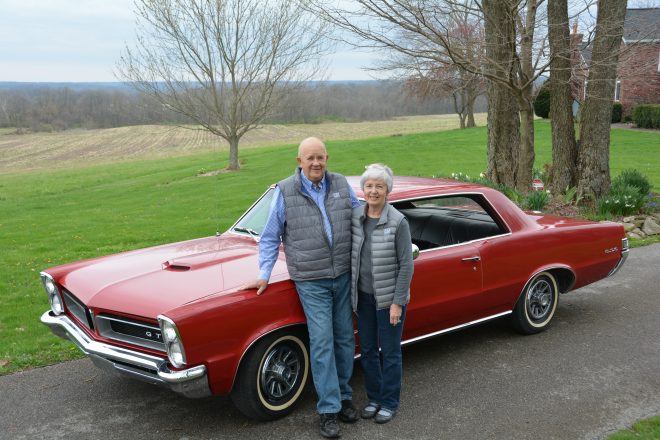 “It was the first brand-new car I ever bought,” recalls Bloomington resident Joe Peden. “It was a bright, Montero red 1965 Pontiac GTO, a two-door hardtop with a 389 engine, a four-speed Hurst transmission and a Carter four-barrel carburetor.”

When shopping for insurance for his new prized-possession, Peden said, “I wanted an insurance company that had a good reputation and was reliable.” He chose Indiana Farm Bureau Insurance and like the GTO, which he still owns, “It has proven to be the correct choice for 50 years,” he says.

“They treat us like family,” Peden said at the convention. “Everyone is extremely good to work with and we always have peace of mind. We’re lucky; we’ve only had minor accidents.” The Pedens have also insured many other automobiles, their farm and home throughout their 50 years with the company.

Peden bought his car for $2,860 and remembers filling it up for just $2.80. He jokes that the GTO got good gas mileage, “if you didn’t push it too hard.” The car helped him court his wife, Joyce, and took them to Gatlinburg, Tennessee, on their honeymoon when they married in 1969. It brought both their kids, Rachel and Phillip, home from the hospital and made countless trips to and from work.

Though the car was still in great shape, Peden had some restoration work done in 1986. He says, slyly, “The only secret I ever kept from Joyce is how much it cost to restore it.” The GTO will be passed on to Phillip while Rachel will receive a 1967 Pontiac Lemans convertible.

The Pedens have been actively involved in Monroe County Farm Bureau for decades; Joyce was a women’s leader and Joe served as president. “Everybody I know has probably been in that car. I used to garage it in Evansville when I went to National Guard summer camp.” Referring to IFB President Randy Kron, Peden says with a smile, “I’m pretty sure even Randy’s dad dusted off the tires.”