Indiana Farm Bureau Insurance Looks to the Sky With Drones 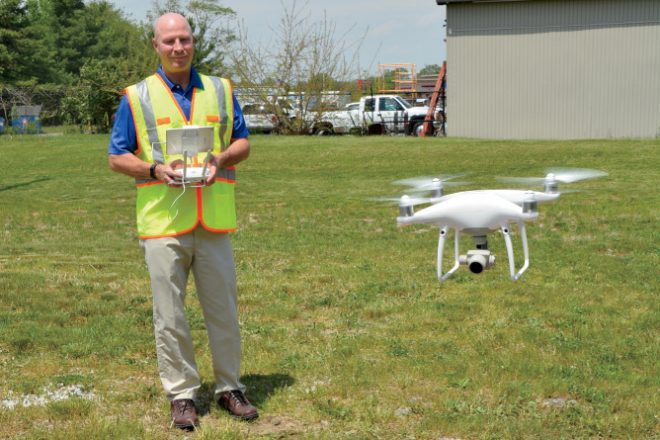 A drone is an unmanned aerial vehicle that is navigated either manually with a remote control or operated with GPS software.

“We tried drone usage several years ago but the quality of the drones was very poor,” says Darrin Walton, executive director of claims. “A spring breeze would blow them out of the air. There have been vast technology improvements in the drones themselves as well as the quality of the images they provide.”

Eight employees attended an FAA Part 107 course in March at Indiana State University and received their certification after passing an online test. A certified flight instructor provided them with intense drone flight training in April.

“Drones will provide a much safer option instead of employees getting up on the roof,” says Brandon McIntire, farm and property coordinator. “We hope to have quicker inspection and response time to our clients, especially during a catastrophic event, such as a tornado.”

Despite the convenience of drones, they will not replace claims adjusters or field underwriters. There is still need for human experience.

“Often it isn’t feasible for our staff to look at the top of every structure, such as a grain bin,” Walton says. “The drone provides a visual aspect not available normally.”

“So far, I’ve been really impressed by the detail that the drone camera picks up,” noted commercial specialist Dwayne Cooper. “It is making my job easier and allows me to provide more information to the client.”

In addition to the safety benefits, using drones will help claims adjusters gain a more thorough picture of damage to a client’s property.

“Ultimately, this is one more tool designed to provide the best claims experience we can to our clients,” Walton adds.