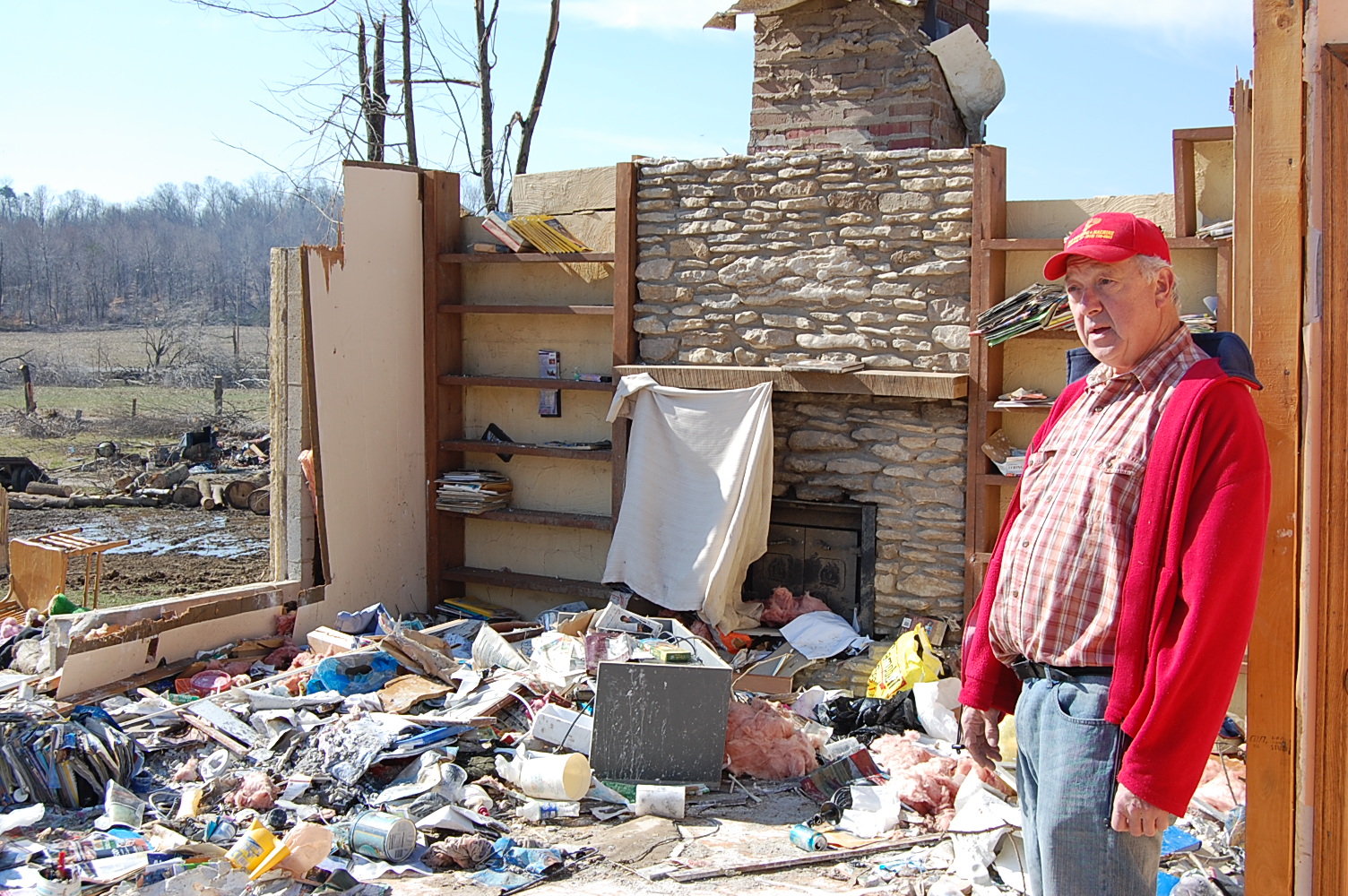 Paul Walden stands in the area where the closet he and his dogs hid in during the tornado once stood. The fireplace wall is the only wall left standing in the home.

Paul Walden typically didn’t give much attention to storm warnings. Laid back and retired for several years, the Henryville, Indiana, resident liked to go out on the front porch of his unique Swiss chalet-style house to watch the storms pass by instead. He spent most of his time outdoors working on or tinkering with projects in the garage or barn on his four acres of heavily wooded land. “I always felt safe there,” he says of the home he shared with his wife and pets. Despite not having a basement, “I’d never been afraid in that house,” he says.

On Friday afternoon, March 2, 2012, Mr. Walden’s wife, Patty, and daughter, Heather, both at work, each called to tell him that weather reports were warning of a tornado approaching the Henryville area. After the calls from his family, Mr. Walden stepped out on his front porch, and beyond the greenery of his own yard, he was alarmed to see a threatening “gray wall tearing up the neighbor’s property.” He immediately recognized that this storm was different and he frantically gathered his dogs in the closet beneath the stairwell and wrapped his hands tightly around the doorknob, pulling it closed and struggling to keep the door shut against the suction of the storm. The family cat, who’d hidden under the bed after becoming frightened by the sound of the approaching tornado, would have to fend for himself.

The cliché held true in this case; the tornado “sounded like a freight train right inside the house,” Mr. Walden says.

And then suddenly, all was quiet once again. Still gripping the door knob, he looked up and saw the sky from where he and the dogs huddled inside the closet. The roof was gone. He opened the closet door and saw that the walls of his home were no longer there. Most everything the Walden’s had acquired during 37 years of marriage was gone. The home they owned outright and had worked so many years to pay off was completely demolished. Then the hail began.

“It felt like someone was hitting me with a baseball bat,” Mr. Walden says. Large chunks of hail suddenly began pelting his body, creating large bruises on his shoulders, arms and hands. There was so much hail that it was as if a white wall was suddenly built up all around him within seconds.

Desperate to protect himself from the pummeling, he found a large plastic case on the ground that held vacuum cleaner attachments and put it on his head to keep from being knocked unconscious by the hail. Today Mrs. Walden laughs as she pictures her husband with the vacuum cleaner case on his head. “He’s a little bit of a character,” she says, smiling, a little bit charmed by her husband’s ingenuity. 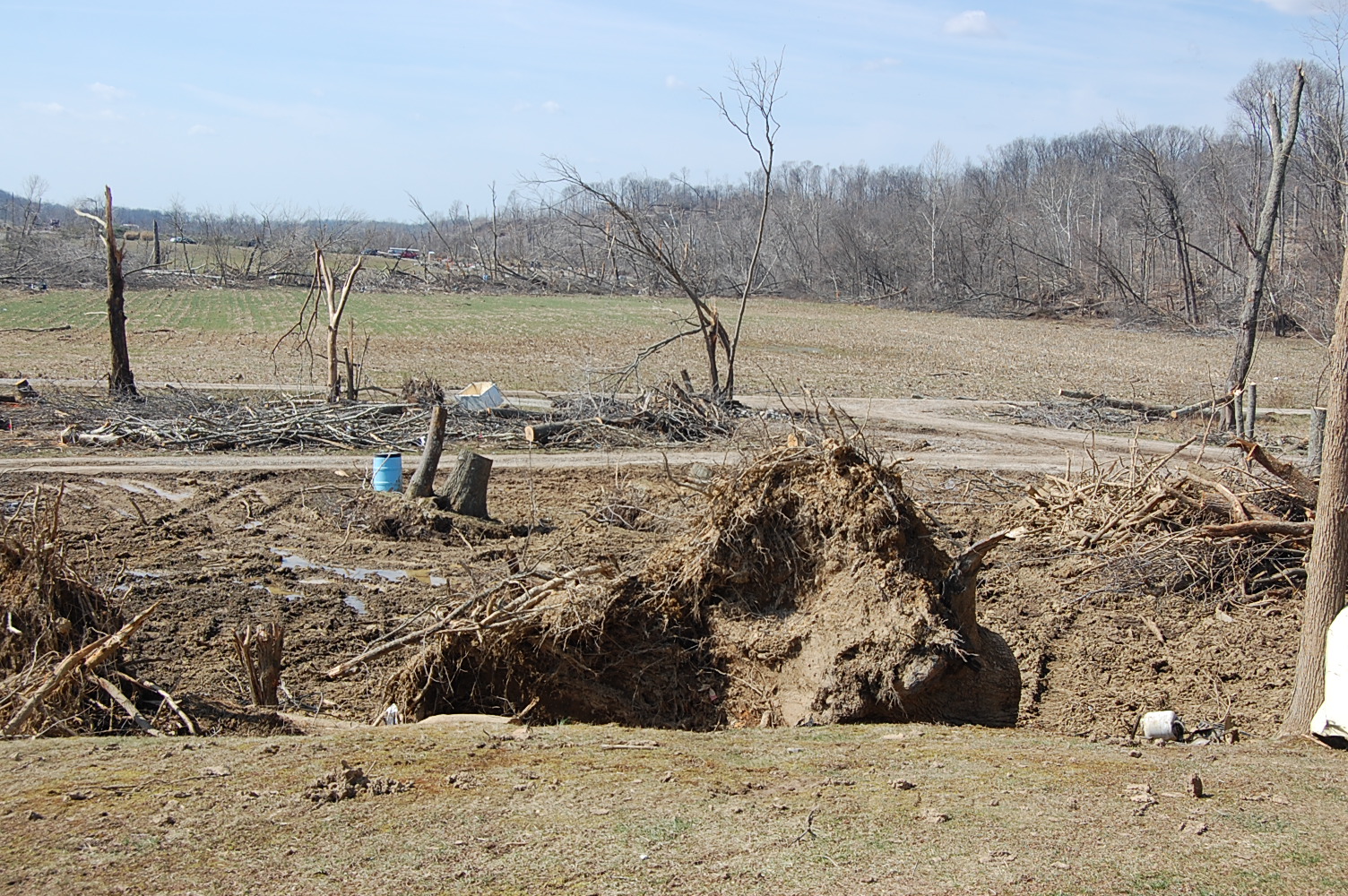 Although many trees on neighboring properties were hardly touched, all but one tree on the Walden property was uprooted or damaged too severely to save.

On the day of the storm, though, while Mr. Walden was personally enduring the tornado, Mrs. Walden was in lockdown at the school she works at. She was unable to leave, and TV reports were stating that Henryville had essentially been destroyed by the tornado. Frantic to know that her husband was OK, she tried calling him dozens of times but cell phones weren’t working.

She was eventually able to leave school and tried in vain for two and a half hours to get home. The storm covered the roads with huge fallen trees and branches and most were destroyed or closed from the extensive damage. She stopped at the family’s pastor’s home for a place to stay while she figured out what to do. She still didn’t know if her husband or pets were still alive.

Heather, the Waldens’ adult daughter, was also frantic to find out if her father was OK. When her car could no longer get through the roadways due to the downed trees and debris, she started walking towards the home she grew up in. Heather climbed over trees and branches and scrambled through streams, her feet and clothing wet and dirty, all the while terrified of what she’d find when she got there. When she finally got within visibility of the property, she saw that everything was destroyed. The house was gone. She screamed and dropped to her knees.

“I truly thought my dad was dead,” she recalls.

Just then, her dad came out of the rubble and began walking towards her. Heather fell to her knees again, this time out of sheer joy and relief to learn that her dad and all their pets were alive.

One tree is all that remains on the acres that were once a fully wooded, park-like setting. Scattered all over their land were personal photos, checks, bank statements in addition to many items that belonged to other residents that had been deposited to the Walden’s property by the tornado.

Southern Indiana, particularly Henryville, was hit hard by tornadoes and Indiana Farm Bureau Insurance claims personnel worked long hours to help clients as quickly as possible. Property field claim representative Scott Jones visited the Walden’s property and, recognizing the devastation, immediately provided funds for necessities such as clothing, food and shelter. The very next day, Jones delivered a check to the family to rebuild their home.

“We’ve always been loyal to Indiana Farm Bureau Insurance and they’ve been fair and prompt in handling our claim,” Mrs. Walden says. “Our daughter is a third generation customer!”

“We’re better off than so many others who didn’t have insurance. And we’re so grateful that our family, including all our pets, survived. But it’s hard. You get up one day and go to work and everything is fine, and before you can make it home, your whole world has changed and it really won’t ever be the same again,” she says.

Approximately 80 volunteers a day helped the Waldens as they began the arduous task of cleaning up the shreds of their former life. A local church brought in heavy equipment to cut up and take away the countless trees that had fallen. Organizations delivered bottled water and boxed lunches. Members of an organization based in Florida hand delivered envelopes of cash to those who lost everything.

Personal belongings and debris from miles away were deposited on the Walden’s property by the tornado. A local church became a lost and found deposit for items found by non-owners.

A local man, Bob Linert, of Better by Design, donated the blueprints for the Walden’s new house and new cabinets were also donated. A woman in Ohio, who found some of the family’s photos transported by the storm, will give the Waldens some flowers to plant in their yard.

“It’s heartwarming how generous complete strangers have been,” says Mrs. Walden. And yet it was also humbling for the Waldens, whose strong faith has always led them to be altruistic with others. “It was hard to be the ones who needed help.”

Just a few weeks after the tornado, the Waldens celebrated their 37th wedding anniversary. “It was more special this year. I could have lost him,” Mrs. Walden says, wiping her eyes with a tissue. “We’re closer now, we appreciate each other more, having gone through this together,” she notes. “We are grateful to be alive.”

The family is ready to rebuild, desperate for a sense of normalcy. Without a home to live in, the family refers to their four acres as “the property” for now.

“Our new house will have a basement for safety during storms,” Mrs. Walden notes. “And I’ve always wanted a window over the kitchen sink so I can look out over our property. It’ll take time, but we’ll have trees again,” she says. “One day it’ll be home again.”