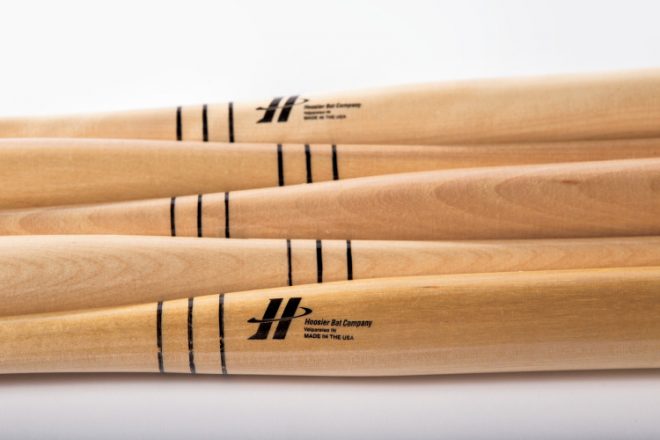 As a scout for the New York Yankees, Dave Cook noticed that an overwhelming number of the players he signed struggled to make the switch from aluminum bats to the wooden bats of the pro leagues. Tackling the problem head-on, he set out to create a bat that would make that transition smoother.

The result was the Woodforce 2000, a bat composed of three different pieces of wood: ash for the handle and maple for the barrel, with a 6-inch hickory “sweet spot” for hitting. In 1990, Dave and his wife, Debbie, started the Hoosier Bat Company in their hometown of Valparaiso to deliver Dave’s invention into the hands of players. 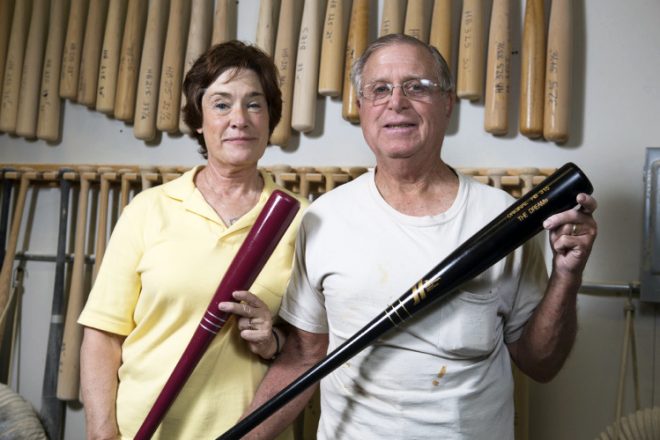 Eventually, they added bats made from ash, the wood traditionally used in baseball bats. However, ash has a tendency to peel and flake after a few hits, and the Cooks were soon on the hunt for a more hardy wood. The heavier hickory slowed ball speed too much, and maple had a reputation for shattering.

In the end, the Cooks decided on birch, a stronger, less costly wood that’s “very close to the cell makeup of maple” but that has “some flex to it when the ball hits it, instead of snapping and breaking,” Debbie explains.

The Hoosier Bat Company quickly became a player favorite, thanks to its sturdy, durable bats. Frank Thomas (formerly of the Chicago WhiteSox, Oakland Athletics and Toronto BlueJays) hit his 500th home run using a Hoosier Bat, and in 2012, Prince Fielder (then of the Detroit Tigers) won the Home Run Derby with one. 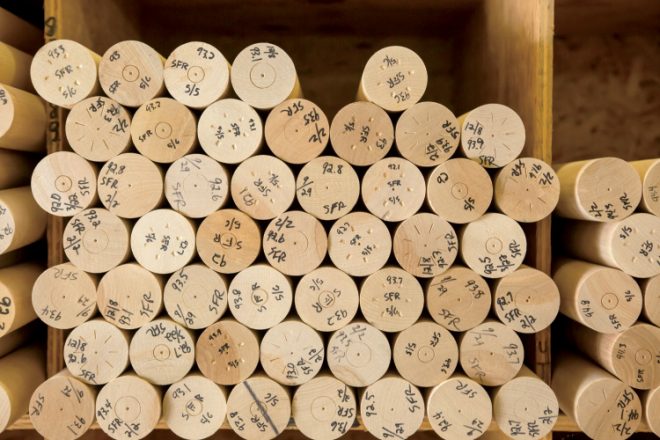 Hoosier Bats have been shouldered by sluggers with the Seattle Mariners, the Chicago White Sox, the Baltimore Orioles and the Cleveland Indians. They can be found on baseball diamonds in Japan, Sweden, Canada, Mexico and Germany. And three Hoosier Bats are on display at the Baseball Hall of Fame in Cooperstown, New York.

Now in its 26th year, the Hoosier Bat Company is the third-oldest wooden baseball bat company in the United States, after Rawlings and Louisville Slugger. All bats are handcrafted from pro-grade wood and finished with Hoosier Bat’s signature “three rings” of excellence, whether it’s a game bat or the fungo bats that coaches use for fielding practice.

But Hoosier Bats aren’t just for the bigger leagues. “We make a 27-inch bat for the little tiny guys all the way up to 34 inches,” Debbie says. They also make personalized bats for company awards, coaches’ gifts, graduation presents, birth announcements and even weddings.

Each bat begins as a round billet of wood, sourced from the best regions in North America and carefully inspected by the craftspeople at Hoosier Bat. The wood is then brought to the lathe where it is cut into the length and shape specified by the player. Once it’s been weighed and measured for accuracy, it’s sanded down until smooth. The bat is then carefully dipped into tubes of regulation paint and hung to dry before getting a second coat. Then to the stamping room for the final touches: the company logo, model number, player’s name and the three hand-painted Hoosier Bat rings. 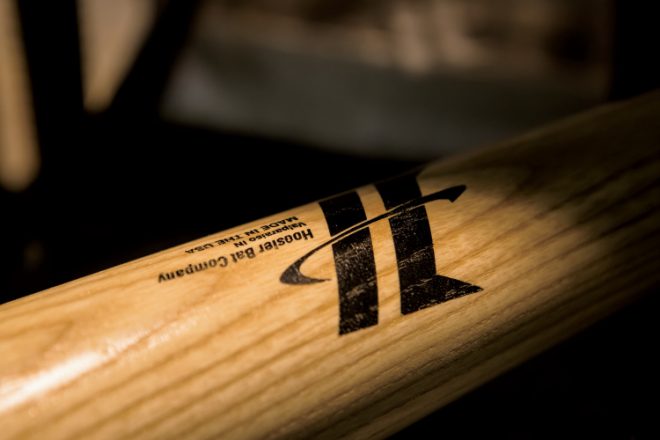 “With larger companies, it’s pretty much all automated where (the wood) goes in the top and out the bottom of the machine” Debbie says. Hoosier Bat Company, on the other hand, prides itself on having someone overseeing the manufacturing process every step of the way. As a four-person company, that includes Debbie and Dave. That kind of attention to quality is what has Hoosier Bat Company still hitting home runs after almost three decades.