Rise From the Ashes 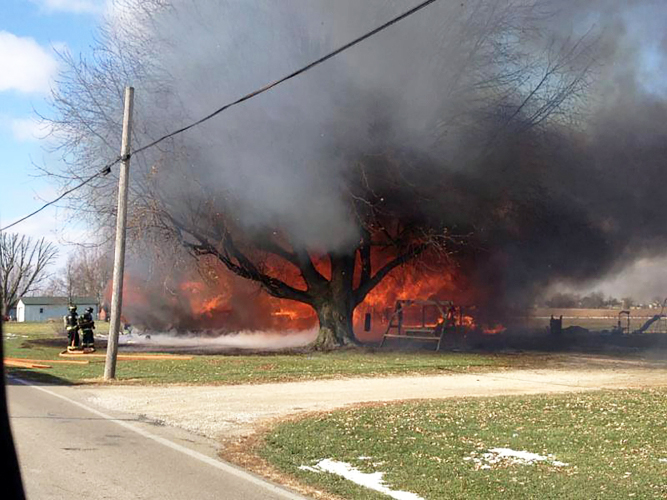 On a very cold Nov. 20, 2014, Sally Wells was at work at First Merchants Bank in Franklin when she got a call from her security service alerting her that her house was on fire. Sure enough, when she viewed the security camera footage from her kitchen she saw the room was full of smoke.

Her husband, Mike, was home sick that day, so Sally’s immediate reaction was to get in touch with him. It took almost a half an hour, but she learned Mike had been at the doctor and was not home.

“I got a call from Mike’s sister telling me their house was on fire,” says Alice Knigga, the Wellses’ Indiana Farm Bureau Insurance agent. “I grabbed Katy Armstrong, property field claim representative, who was in the office, and we rushed to the house.”

By that time, both Sally and Mike were at the site, watching as fire completely engulfed the home they’d lived in since 1997. It was later determined that the cause was an electrical fire in the bedroom.

“It was so cold and windy that day, but you could feel how hot the fire was,” Knigga recalls.

The home is in the country with no nearby fire hydrants. Fire departments from Franklin, Amity, Trafalgar, Nineveh and Edinburgh all responded with pumper trucks filled with water.

“I was standing with Mike and Sally when the fire chief walked up and says, ‘You’re going need to get in touch with your insurance agent,’” Knigga says. “Mike pointed at me, and the fire chief says, ‘So she’s responsive?’ It was a chuckle we all needed.”

Though no one was hurt in the fire and all pets were safe and accounted for, the home was a total loss. The Wells family lost everything: important documents, mementos, family artifacts. Not even a toothbrush was left.

“After we called Alice, she and Katy were there within minutes,” Sally Wells says. “Alice was holding onto me telling me that everything was going to be okay and that we were going to get through this. It wasn’t just words – she was genuine.”

According to Sally Wells, Knigga was back within hours with a check from Indiana Farm Bureau Insurance for necessities. While their house is being rebuilt, Mike and Sally have been able to stay in the home of family members who are wintering in Florida.

“The Wells family had just gone through a devastating loss that has a lot of emotion surrounding it,” Dunn says. “We needed to be mindful of their emotions while guiding them through the claims process to return them to some sort of normalcy.”

Knigga was scheduled to go on vacation but postponed her trip to remain available. The next day she, Dunn, Armstrong, agency manager Mike Perry, and Mike and Sally all met at the Franklin office.

“When an insured has a loss of this magnitude, we all have to come together to deliver on our promise to make them whole again,” Knigga says. “We will go over everything as many times as they need; they just lost everything and they’re in shock. They are hearing us, but not hearing us.”

“They were so patient with us, going over things time and time again,” Sally Wells says. “I felt like we would ask some silly questions, but they answered everything and never made us feel bad. You often hear horror stories about insurance companies, but everyone at Indiana Farm Bureau Insurance worked together to help us through this. They kept us going.

“It was almost like their home burned – because they were so caring,” Sally Wells says. “We were never another case file or a number; we were always ‘Mike and Sally.’ This was a good experience that came from a bad situation.”

Alice Knigga’s motto is to treat every client as she would want her family treated. She says she takes it very personally.

“We’re very familiar with our clients,” Knigga says. “We know what is going on and we know them; their losses hurt us, too. That is the beauty of Indiana Farm Bureau Insurance.”