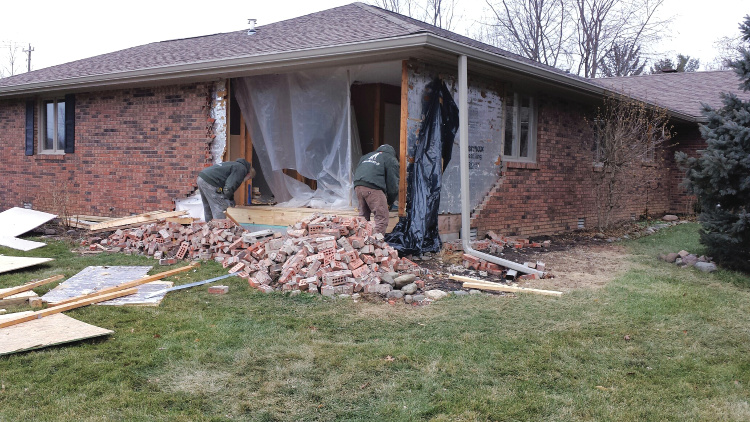 Teenagers out for a joy ride were speeding and lost control of the Infiniti SUV they were driving. They crossed through a neighbor’s yard, across another road, through a gully and came to rest inside the Mahers’ spare bedroom.

“My husband was still asleep in bed,” Nancy Maher says. “What a way to wake up! He ran into the other bedroom and saw the car with all the airbags deployed, but no one in the car.”

Luckily, no one was seriously injured, and the three boys who had run away from the crash did return to the scene. The damage to the house was extensive. All but the very back end of the SUV was in the house. Bricks from the exterior of the house had been catapulted through the wall of the next bedroom’s closet; household items, glass and insulation were everywhere. According to Maher, it looked like a bomb had gone off.

Property field claim representative Jim Dunn worked with the Mahers on the claim.

“There were a lot of complicated issues in this claim,” Dunn says. “I told Nancy and John that we would handle it, so they could focus on getting their home back in order. They were both so appreciative.”

“This was our first homeowners claim, and the whole process made us feel like a deer in headlights,” Maher says. “Jim made our life so much easier. He told us how to look for contractors and was there to offer guidance along the way.

“At one point, we joked about a piece of wood sticking out of the wall and said, ‘Is this the wood we’re supposed to stop knocking on?’ The claim process was much faster than I expected, and everything ran so smoothly, just like clockwork.”

While the Mahers fixed their home, Indiana Farm Bureau Insurance was able to assure the repairs were paid for by the person liable. The house is now fully repaired, and the Mahers look forward to art imitating life from now on.

“Indiana Farm Bureau Insurance took care of us,” Maher says. “We didn’t have to deal with any of the chaos. They handled it all for us, so we could focus on repairing our home. I’m so very grateful for that.”