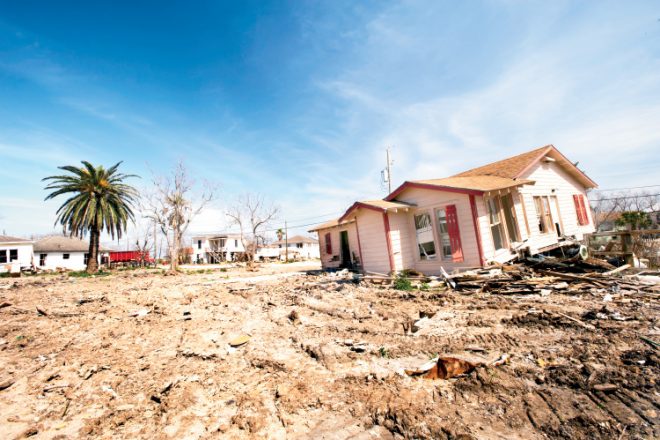 This past September, you couldn’t turn on the TV without seeing heartbreaking images of the devastation caused by Hurricanes Harvey and Irma. Hoosiers rallied and sent supplies and donations to those affected, but a few Indiana Farm Bureau Insurance claims representatives got the chance to provide hands-on help.

“When there is a large scale catastrophe, Farm Bureaus work together,” says Darrin Walton, executive director of claims for Indiana Farm Bureau Insurance. “Texas and Georgia Farm Bureaus sent out messages that they needed additional help processing the huge volume of claims. We were happy to help them and their members. Plus, you hope you’ll never need the additional help, but one day it could be us asking.” (In fact, Indiana Farm Bureau Insurance did need help in 2008 for the damage caused by Hurricane Ike).

Teams of adjusters deployed separately to Texas and Georgia for two weeks each. Everyone who went volunteered.

“I was born and raised in Texas and still have family there – some that were affected – so it touched home,” says Ellie Roth, office claims representative. “But mostly, I just wanted the chance to help.”

In addition to learning new computer systems and a slightly different way of doing things for a new company, other hardships presented themselves: inability to communicate, new topography, unknown areas and, according to property field claims representative Josh Schultze, mosquitos as big as humming birds.

“Almost every member I helped was displaced from their home,” says Deann Gardner, field claims representative, who was in Texas. “Many had no access to their paperwork, and mail delivery was unpredictable. We had to rely on electronic communication.”

Field claims representative Holly Stough worked in the mountains of Georgia. “I was a good two hours away from my appointments, in the middle of nowhere. I drove 3,000 miles in just two weeks.”

Two weeks is a long time away from home and the office, and their workloads didn’t cease. Those left behind picked up extra work to allow staff to help others. But it was all worth it.

“The members there appreciated the fact that their company thought enough of them to bring in extra help,” Walton says.

“The staff and members were all so grateful,” says office claims representative Jodi Ritter. “Members wanted to know our story and where we were from. And every single one thanked me for coming to help.”