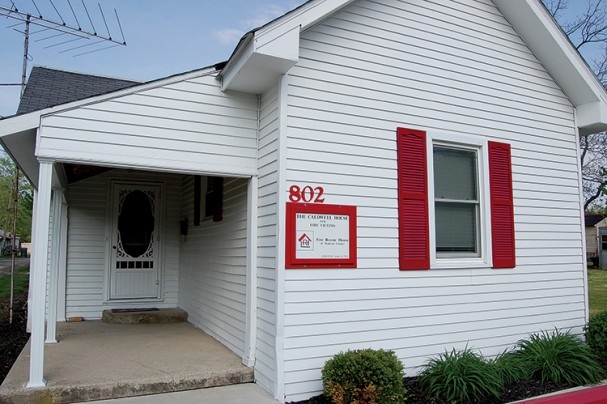 On the other side of the world, on a dream trip to the Greek Islands, Indiana Farm Bureau Insurance Agent Frank Caldwell and his wife, Connie, awoke to a nightmare. A phone call bearing tragic news had come in, and at 6:15 a.m. on April 20, 2010, they learned that their only child, 36-year-old Eric, had been killed in a car accident the previous day.

The couple returned to Indiana and began the unthinkable task of planning a funeral for their son and dealing with his estate. Eric had purchased a little house in Alexandria, and the Caldwells wondered what to do with it.

“I didn’t know what we were going to do with his house, but I wasn’t letting it go back to the bank,” Frank says.

Through various inquiries and conversations, Frank met Anderson firefighter Skip Ockomon, who introduced him to the Madison County Fire Rescue House. The house is now used to provide temporary shelter to victims of fire or natural disaster who have nowhere else to go. Families may stay for two weeks, and food, clothing, medical treatment, spiritual counseling and anything else they may need are provided through donations.

“I told Frank, ‘If you donate the house in Eric’s memory, it will benefit families in the future,’” says Ockomon, founder of Madison County Fire Rescue House. He currently serves as a board member and director of House #1.

The Caldwells began the arduous task of donating Eric’s house.

“Every parent wants their child’s life to mean something and their memory to continue on,” Frank says. “I was no different, and I made it my goal in life to do something about it.”

Despite lots of red tape and several setbacks, the keys to Eric’s house were turned over to the Madison County Fire Rescue House on July 15, 2010, barely three months after Eric’s passing. It housed its first family Jan. 22, 2011. Now known as the Eric Caldwell Fire Rescue House (or House #2) the temporary housing provides fire victims some relief from the stress associated with their loss and the process of rebuilding.

“The Fire Rescue House helps fill the gaps that exist for victims,” Ockomon says. “After the fire, everyone needs a safe place to call home, collect their thoughts and begin rebuilding. We do their thinking for them for a bit; [we] give them a chance to make a plan of action to get back on their feet.”

In a diary kept by guests of the home, everyone is thankful and appreciative. One guest, Crystal, wrote, “If not for Frank and Connie Caldwell, I don’t know where we would have laid our heads last night. We were able to sit around a kitchen table and eat dinner as a family … so many things to be thankful for.”

There are now three homes providing relief in Madison County. Since November 2009, the program has provided a temporary home for nearly 60 families or more than 200 people.

When asked about Eric’s legacy, Frank still chokes up.

“Eric gave so much to so many,” Frank says. “If he were here, he would continue to give, so we do this for him.”

The program has been so successful that other states have come to study it. There are now fire rescue homes in various parts of Indiana as well as Texas and Kentucky. The organization fields phone calls from across the country asking about the program. For more information or to make a tax-deductible donation, visit firerescuehouse.org.

“Frank acts tough, but he has a kind heart,” Ockomon says. “At the end of the day, all he wants to do is help people.”

Frank now serves as president of the organization and also as director of Eric’s house.

“After the shock of losing my son, I could have either climbed in a hole or done something to honor Eric’s memory,” Frank says. “We’re proud to know that someday, when a family is in crisis, they will be staying in Eric’s home, where he would have welcomed them in with open, giving arms.”