Handcrafted Cowboy Gear Made in Indiana

When Jay and Lyn Ocken of South Whitley began making heirloom-quality bits and spurs from sterling silver and steel, they never dreamed it would bloom into a family business. [Watch a video of Ocken Bit and Spur] 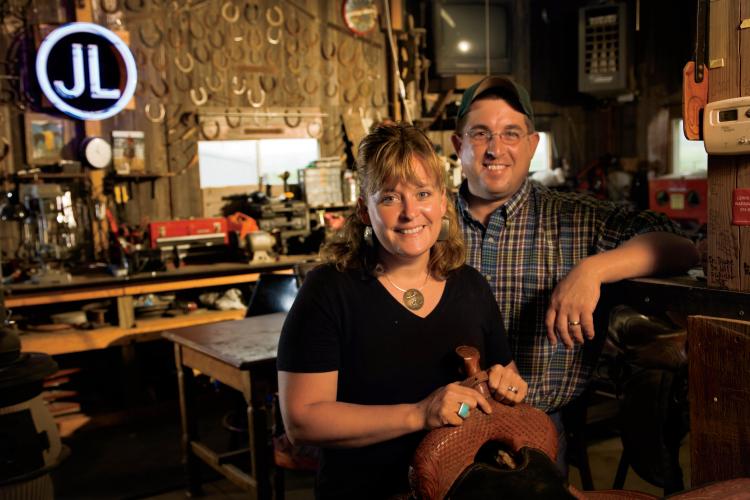 “My husband and I are both teachers, and we both have shown horses all our lives,” Lyn Ocken says. “We wanted some nice cowboy gear, but didn’t have the money, so we began making bits, spurs and other products for ourselves as a creative outlet.”

Soon, people began asking the couple to make customized buckles, bits, spurs and conchos, so the Ockens launched a part-time business, Ocken Bit & Spur Makers, in 2003. “We went to Canada and worked with a bit and spur maker there, and I went to Texas and worked with an artist and engraver,” Ocken says. “I fell in love with that aspect of it, so now Jay does all the metalworking, and I do the engraving.”

Metalwork is one of many hats the Ockens wear. Jay Ocken teaches industrial technology for high school students in Whitko Community Schools, while Lyn teaches elementary art in Huntington County Schools. Jay also shoes horses (a job he has loved since the age of 14), and the couple has three children – 10-year-old Jarrett, 4-year-old Justine and 1-year-old Jhett. The family lives on 16 acres with their dogs, five horses and four ponies.

Appropriately, Lyn and Jay met in college while competing on the Ball State University Equestrian Team. Now, they’re passing their love for horses on to their children.

“Jarrett has shown horses in 4-H since he was 2, and he plays football,” their mother says. “Justine has a pony she shows.”

Among the family’s ponies are White Buttermilk, Buckmoo and Dolly. Their horses have unusual names such as Doctor Bob’s Dun Cuttin’ and Ugly But Quick.

“He’s not really ugly,” Ocken is quick to point out. “His name came from a joke.”

The couple spends a lot of late evening hours in a small shop on their property where they fashion their cowboy gear. 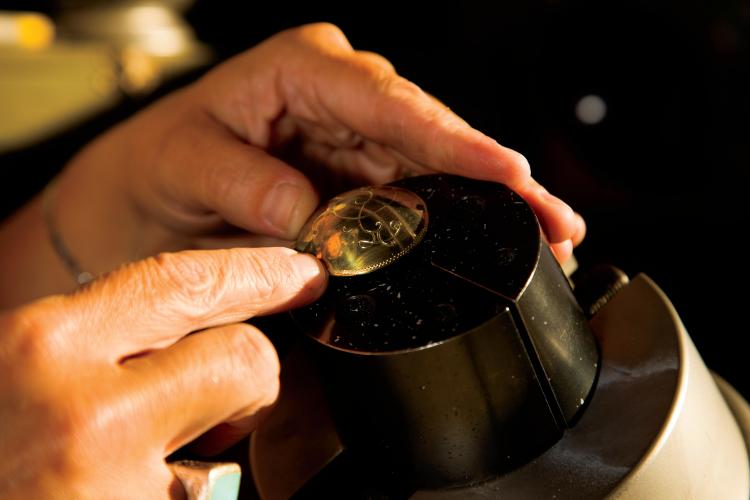 “We’ve kept the business small and manageable, but we’ve been surprised at the positive response we have gotten and the number of connections we’ve made,” Ocken says. “We pay close attention to detail, and create functional and artistic pieces nobody has had before.”

One project the couple completed was a set of spurs for a woman who had survived cancer.

“We worked the cancer ribbon into the design, so the spurs tell her story,” Ocken says. “We also made conchos for her saddle, and each told the story of one person in her life who was really meaningful. One concho was designed with praying hands to remind her of what she had been through.”

• bit: a type of horse tack placed in the mouth of a horse in order to help riders communicate with the animal
• spur: a manmade aid located on the heels of cowboy boots used on occasion by riders to reinforce the natural leg aid to direct a horse; often, spurs are purely decorative and not used to communicate with the horse
• concho: a silver ornamental disk often found on saddles, chaps and other horse-related items
• tack: any type of aid or tool used when riding a horse (as in saddle, bridle, spur, etc).

People often order memorial pieces in honor of someone who has died. “It’s very touching,” she says.

The kids like to help in the shop whenever the opportunity arises. Jarrett even sold handmade silver necklaces to raise money for one of his classmates who was undergoing treatment for leukemia.

“He took some scrap pieces of silver and filed them down on the graining wheel, and I engraved them,” his mother says. “The little girl he sold them for is now in remission.”

In addition to giving the Ockens a creative outlet and second source of income, the business is a tribute to their heritage. Both come from a long line of horsemen and horsewomen, and Jay’s great uncle was a silversmith in Chicago. His great-great grandfather was a watchmaker. 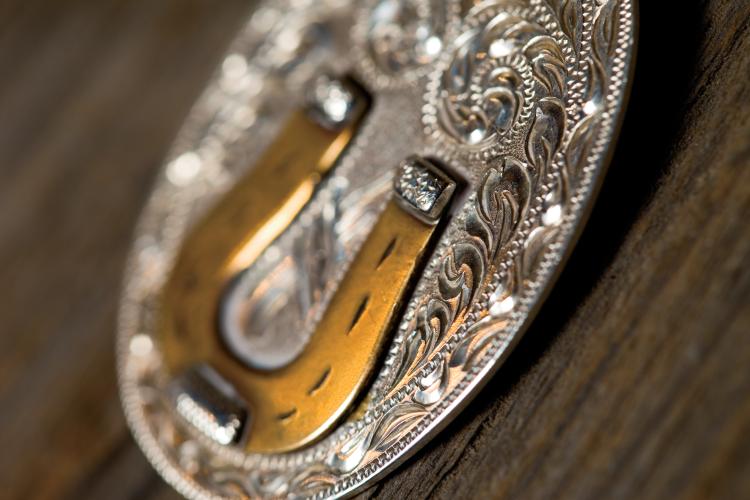 Ocken Bit & Spur Makers is a member of Indiana Artisan, a collaborative program that unites Hoosier artisans who concoct everything from jewelry and woodwork to chocolate and cheese.

“We didn’t even see ourselves as artists at first,” Ocken says, “so we’re very honored to be a part of that program.”