Schimpff’s Confectionery is 120 years old yet remains a red-hot attraction in downtown Jeffersonville, Indiana. Of course, “red hot” has a double meaning in this case. Not only do the confectionery and adjoining museum draw tourists, but red hots – the candy – also happen to be a Schimpff specialty. Those tasty red nibbles are one of the many sweet treats that Warren and Jill Schimpff produce in their fourth-generation business. 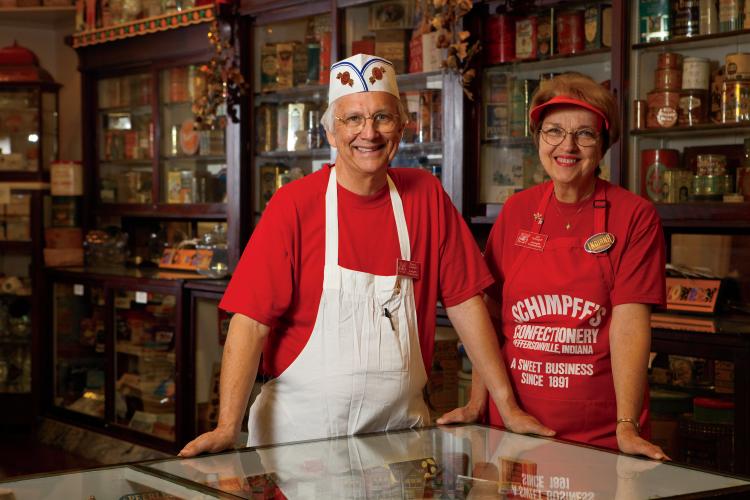 Warren’s family has been making a living in the candy business along the Ohio River since the first family candy store opened in Louisville in the 1850s. In 1871, Charles Schimpff opened a shop on the other side of the river in Jeffersonville. That business eventually closed, but 20 years later, Gus Schimpff, Charles’ brother, opened a new confectionery at 347 Spring St. This business, which has been in the same location since 1891, has survived world wars, the Great Depression and a number of recessions – proof that even in the worst of times people still love their sweets. In fact, the confectionery is one of the oldest continuously operating candy businesses in the United States.

Warren’s father was born upstairs in the building that houses the candy factory. Both Warren and his wife, Jill, were born in Chicago. Warren has a Ph.D. in environmental chemistry, but he was always intrigued by candy production and began to learn the family recipes and techniques on summer vacations and visits to Jeffersonville as a teen. “My father was never interested in being part of the candy business, but I was,” he says. 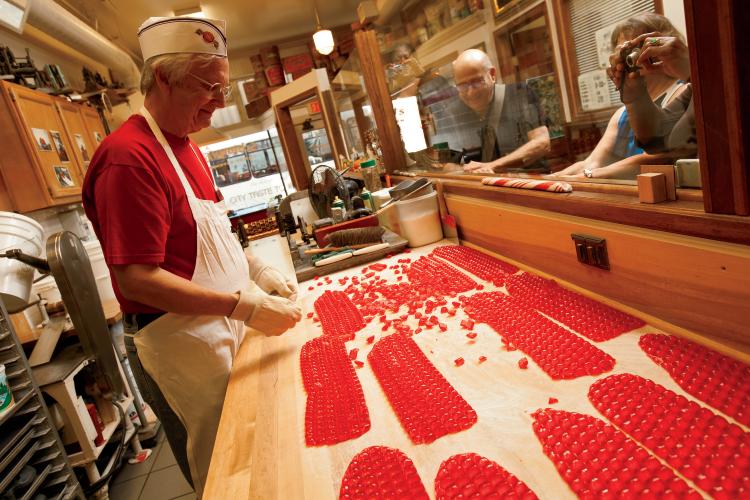 When no other family member stepped up to continue the legacy after his aunt, the previous owner, died in 1990, Warren and Jill decided to change their location, vocations and lives – they became small-town candy makers.

In 2002, the Schimpffs bought the building adjacent to their longtime store to open a candy museum and demonstration room. That combination, along with a lunchroom and confectionery, has made the business a big tourist draw in the river city of Jeffersonville. So big, in fact, that Schimpff’s has been featured on The History Channel’s Modern Marvels. 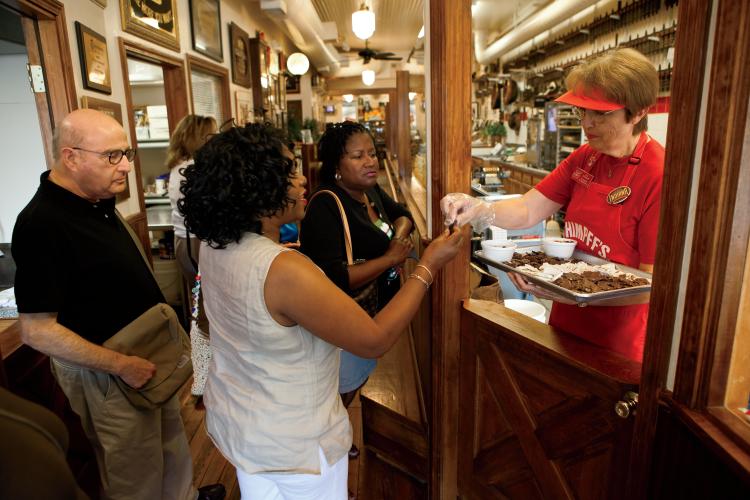 The confectionery produces 50-60 different types of candy treats. Specialties include their tasty red hots (last year they sold 14,000 pounds of the cinnamon candy); caramel-covered marshmallow confections called Modjeskas; lemon drops; horehound; 18 flavors of hard candy fish; and chocolate turtles. In 2009, the company used 21,000 pounds of sugar, 11,000 pounds of chocolate and 6,240 pounds of corn syrup – which, along with another candy staple, peppermint, is an Indiana agricultural product.

So, the next time you’re traveling through southern Indiana, stop by Schimpff’s Confectionery and watch workers make the candy you can buy next door. Although they are retired now (Warren jokes that the word means you get tired one day and “re-tired” the next), you will probably see Jill or Warren Schimpff conducting a tour of the facility, or maybe stirring up a batch of those spicy red hots.