Satek Winery and Vineyard Presses On in Steuben County

Satek Winery opened in 2001, but like the grapes that grow in its vineyards, the roots of Steuben County’s first official winery sink deep in the Indiana soil. [Watch a video of Satek Winery] 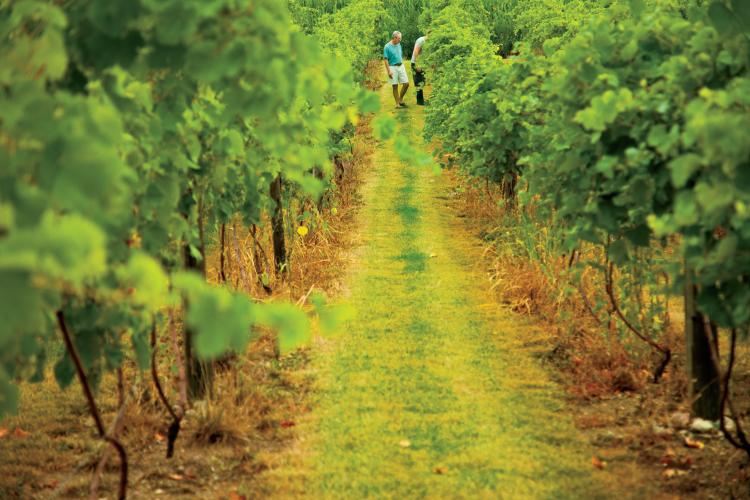 Pam Satek was born and raised in Fort Wayne and graduated from Indiana University. Her family has owned property on Lake James in Steuben County since 1915.

Despite living elsewhere at times, Pam never let go of her connection to the Lake James homestead she’d been visiting since she was an infant. In 1988, she married Larry Satek, and together they came often  to visit the picturesque lakeside property. But that’s jumping ahead in the Satek story.

In the mid-1970s, while a professor at Washington College in Chestertown, Md., Larry rented a house that, as fate would have it, had grapevines growing in the backyard.

“I thought to myself, ‘I have a Ph.D. in chemistry, I should be able to figure out how to make some wine’ – because there is a lot of chemistry in winemaking,” Satek recalls. “And that’s how I started.”

Pam and Larry’s marriage was the second for both, and with several children in college between them and retirement looming, the Sateks found themselves casting about for some post-retirement activity that would also provide a financial hedge.

The land on Lake James clinched the deal.

“Ever since I had first seen the property,  I thought the steep hillside and the water looked very intriguing as a place to grow grapes – very reminiscent of some of the European colder-climate type vineyards,” Satek says. “We visited 15 or 20 wineries in the Midwest and decided that it looked like something pretty interesting to do. We started the Lake James vineyard in the fall of 1992, and in 1995, we started selling our grapes  to other Indiana wineries.” 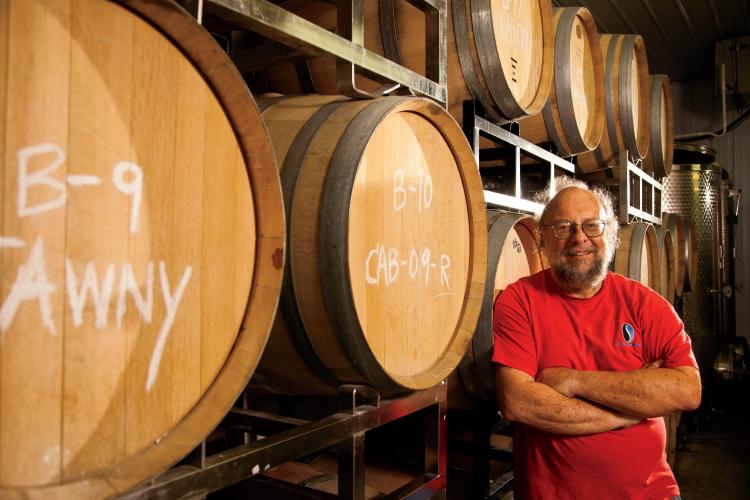 From Vines to Wines

In 1999, when their 7-year-old vines reached full flavor potential, the Sateks held back some grapes and began making their own wines. They fermented them under another winery’s bond while becoming a bonded winery themselves. “By the summer  of 2001, we were ready to open, and we were able to open with 100 percent of the wine coming from our own grapes,” Satek says. “We’ve grown 10-fold in nine years.”

The Sateks grow some of their grapes on their 28-acre homeplace at the north end of Lake James. They also have a 2-acre vineyard at the winery – which is located in Fremont on 16 acres near the intersection of Interstate 69 and the Indiana East-West Toll Road – and a 2-acre plot nearby on a buffalo preserve.

“The main positives about the Lake James vineyard particularly are that it’s on a steep hillside overlooking water, which gives it a much longer growing season and protection against the frost,” Satek explains. But all the vineyards share Steuben County’s chief asset. “Steuben County has very deep glacial gravel and sandy loam soils. As you get further away from the Steuben County line, the soil starts turning into a clay soil – much less favorable for growing grapes,” he says.

Of course, the proof is in the bottle, and Satek’s dry red and white wines, sweet reds and whites, and fruit wines have proven themselves with more than 125 awards in international wine competitions. In 2009 alone, 22 out of 25 wines won medals. Their raspberry wine has racked up five gold medals in six years, and their vidal blanc earned double gold – a rare feat, especially for that variety. 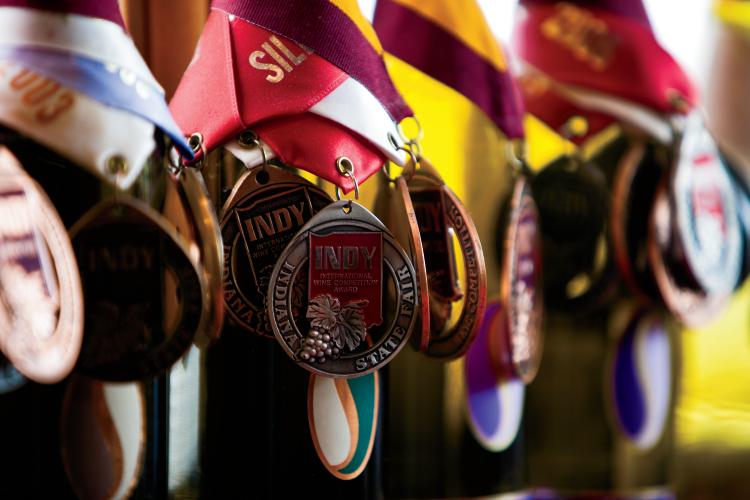 The winery itself is a thriving agritourism destination, welcoming 70,000 to 75,000 guests per year to tastings and special events. Satek is also an active member of the Indiana Winery and Vineyard Association (formerly the Indiana Winegrowers Guild), and wine enthusiasts can learn more about Indiana wineries, vineyards and wine trails at the association’s website, www.indianawines.org.

Interacting with other vintners is just one of many reasons Satek enjoys the wine business. “We have a great staff of 17 employees,” he adds. “My wife just has this instinct about who would be really good at the winery.”

As to what aspect he enjoys the most, Satek says, “I’m a chemist, kind of a lab-rat type person, so the ability to take grapes and work with them to tweak, adjust or blend to make the best possible wines is something I always knew I would enjoy. What surprised me is how much joy I get out of the people-type things. We’ve had people get engaged at the winery. We’ve had weddings at the winery. We’ve had people make our wines part of their ceremony. It’s like people are inviting us personally into a part of their lives. I never realized how much pleasure I was going to get out of that.”