Indiana Artisan is Hoosier Made 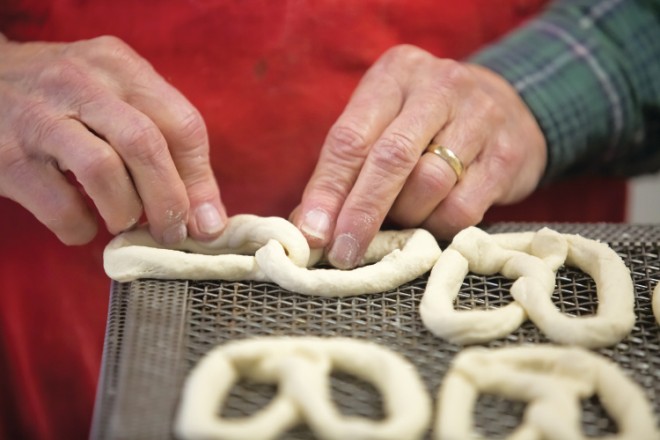 If you’re longing for a taste of Indiana, look no further than Indiana Artisan. The statewide economic development program launched in 2008 to connect consumers with products crafted by Indiana artists, foodists and vintners. It began with a handful of producers and has grown to include more than 300 artisans. Each spring, the organization hosts a two-day Marketplace at the Indiana State Fairgrounds featuring all its participating artisans – among them Tell City Pretzels’ Brad Smith. Smith joins more than 60 other Hoosier foodists in the organization – many of whom are carrying on long traditions of food and beverage production in Indiana.

Oliver Winery in Bloomington, for example, is the oldest and largest winery in Indiana. Spanning 36 acres, the winery traces its roots to the 1960s when founder William Oliver started making wine in his basement. Today, his son, Bill, is working to expand the family business with the addition of Creekbend Vineyard and wines made from Indiana-grown grapes.

In Zionsville, Jane and Fritz Kuntz craft creamline milk, yogurt and cheeses at Traders Point Creamery, a 150-acre organic dairy and artisan creamery. Creamline milk is pasteurized but not homogenized, leaving a nice layer of cream at the top of the bottle. With a few vigorous shakes, the cream will disperse throughout, resulting in thick, delicious milk.

The Kuntz family is committed to preserving not only the land with their sustainable practices but also the region’s agricultural heritage. Their summer Green Market hosts other local producers and artisans, and the farm’s store and restaurant serve a plethora of locally sourced foods.

For a list of participating artisans and more information about the annual Marketplace, visit indianaartisan.org.