Russell Sheep Co.: Ewe Are Sure to Love Their Lamb 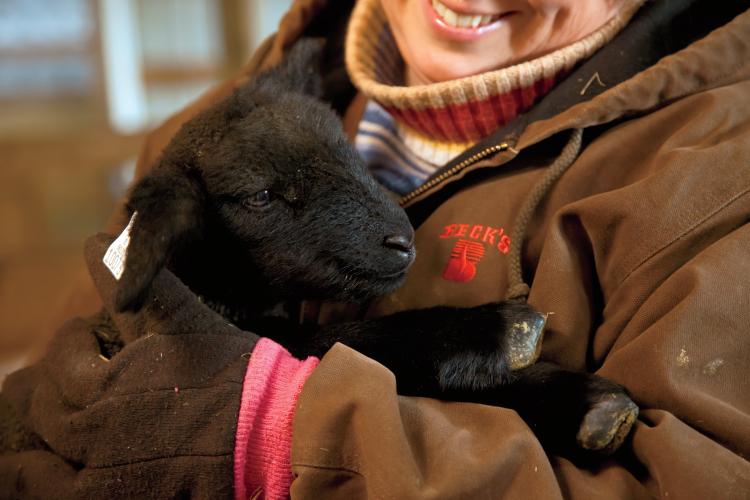 Hoosiers who stroll through farmers markets in Muncie, Greenfield, Westfield and Geist might recognize Russell Sheep Co. from its wide range of locally raised meats including lamb chops, shanks and rack of lamb.

The popular farmers market finds all started with 3-year-old Diane Dawson (now Russell) and a gift of two orphan lambs many years ago. Those two little lambs became a small flock that fostered not only a love for the animals, but also a love for 4-H. 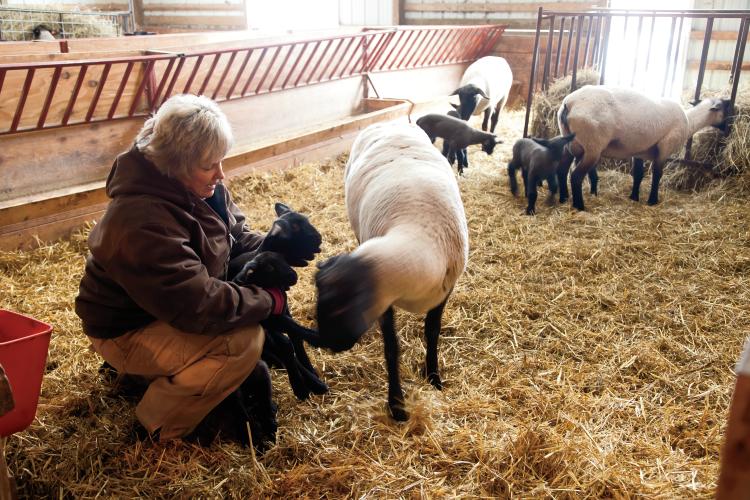 “I was a 10-year 4-H member, and for me the competitions and the [state] fair were the highlight of my summer,” Diane Russell says. “I learned life skills, leadership skills, and had a special interest and success with two projects in particular – sheep and sewing.”

As it turns out, 4-H played a significant role in shaping her future sheep farm.

“I’ve always thought that the 4-H motto, ‘To make the best better,’ was a fitting challenge for any undertaking in life,” she says.

Diane later married Paul Russell and joined his farm in Eaton, bringing along her sheep. Paul Russell, a sixth-generation farmer, comes from a family farm with roots dating back to 1810. Over the past 30 years, the flock has fluctuated from as many as 170 ewes to as few as eight.

When the couple’s youngest son, Jeremy, began participating in a livestock judging team in middle school, he reinvigorated the flock and began again to use the 4-H motto by applying that idea of “making the best better” to the sheep he breeds.

“Genetics can make large impacts in flock quality,” says Jeremy, now 20, explaining that he’s attempting to slowly improve the genetic base of his sheep through careful breeding and selection for specific traits. He does this by breeding high-quality Suffolk and crossbred ewes to create the best-tasting lamb for consumers. The breeding also factors into the show ring, where sheep are judged for structural correctness, definition of muscle and breed quality.

In addition to paying close attention to how the sheep are bred, the family puts a major focus on their care, developing some of their own facilities, including new barns tailored for the animals.

“Everything about our setup has been designed to handle and house the sheep for maximum comfort,”Paul Russell says. The Russells have planned and built almost all of their own pens, feeders, lambing pens (a clean, sterile birthing environment for the ewes that’s kept warm during the winter) and working chute (a gated area where three or four sheep at a time are able to line up for any sort of human handling required, from hoof trimming to ultrasounds).

“The design of our facilities allows us to work with our sheep with very little stress on the animals,” Paul Russell explains. “Our barns are designed to open up for summer heat and tighten down for winter’s chill.”

The area that just got grazed will get to rest for maybe 40 days before we turn the sheep out [there] again,” Paul Russell says. “This method is called rotational grazing and is very environmentally friendly for the soil and the grazing animals.”

The pasture rotation practice allows the Russells to control the sheep’s exposure to parasites as well as manage the growth of their forage, which includes a variety of grasses including Kentucky bluegrass, ryegrass and the yellow-flowered birdsfoot trefoil. 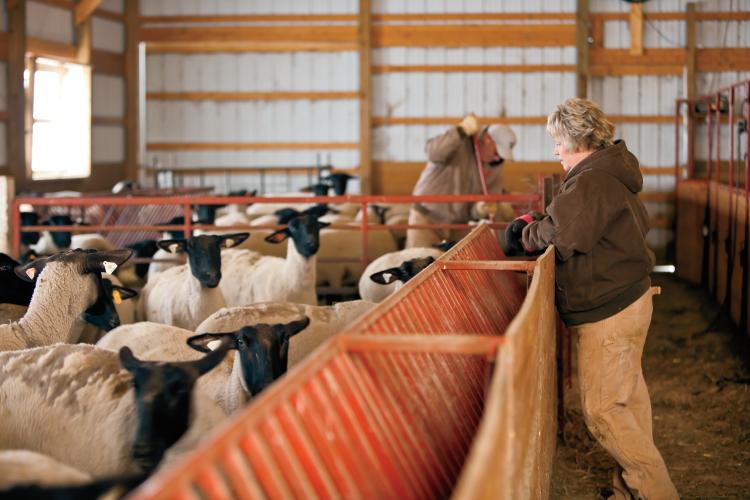 Jeremy Russell, a junior at Purdue University studying agricultural economics, cares for about 105 ewes as the main owner of Russell Sheep Co., while his parents currently farm 1,050 acres of corn, soybeans, barley and alfalfa.

“I really enjoy the lifestyle of living in the country, as opposed to living in an urban area,” says Jeremy. “I think farming is a gratifying occupation, too, because the hard work pays off and makes it all worth it.”

After he graduates, Jeremy plans to return home to farm around 400 to 600 acres of grain while continuing to expand his sheep operation into more markets.

His parents also plan to start their own flock in addition to their son’s. They have 35 ewes, purchased from their son, and hope to grow to about 100 over the next few years.

“Right now, we can’t keep up with the demand,” Jeremy explains. “The number of sheep in the country is declining, so I think there is an opportunity to be able to expand our flock and take advantage of a supply shortage.”

The Russells currently sell their meat at local farmers markets and online at www.russellsheepcompany.com, and Paul Russell serves on the board of directors for the Indiana Sheep Association. In addition, some of the Russell lambs find themselves carrying on the 4-H tradition that started it all – in the show ring. Over the past few years, they have been honored to stand at the top of the class at the Indiana State Fair for their slickly sheared Suffolk ewes, proving that their sheep are a real-life example of the 4-H motto that inspired Diane Russell all those years ago.