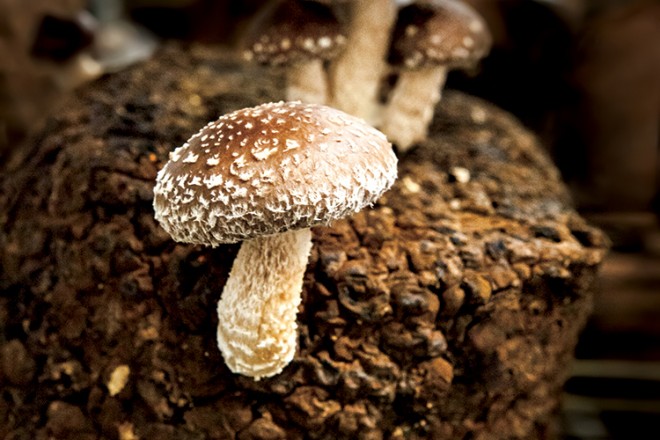 Among the mushrooms already in the farm’s growing rooms, find a big “pretty” piece of the desired variety.

Take it into the lab and cut a piece of sterile tissue from the inside of the mushroom. Put that tissue onto a petri dish filled with a growing medium known as agar. The mycelium, which is the root system for the mushroom, will “jump off” that piece of tissue and grow across the agar.

The mycelium will be transferred into grain that has been sterilized in the farm’s autoclave and brought to the right moisture content, and the mushroom tissue grows through the sterilized grain.

From that point, depending on the species and how large Osborne wants to grow it, the mushroom is transferred into either more grain or sawdust – or sometimes into the final growth medium, which is known as a production block.

The end goal, Osborne says, is to get all of the growing material, which is known as “spawn,” into a supplemented growth material, which in Osborne’s case is typically sawdust. There it’s allowed to “fruit,” or produce the actual mushrooms.

The leftover materials can then be composted and made into dirt for the garden. “It’s just a big circle,” he adds. This is an oversimplification, he explains, but it gives a basic idea. “It’s really a very sterile, clean procedure throughout,” he says.

“You can take one petri dish and turn that into 400 to 600 pounds of spawn in about six weeks,” he adds.