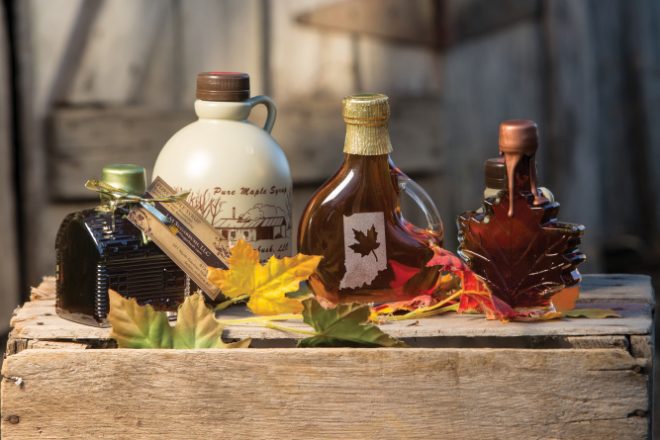 Though rich maple syrup is a breakfast must, you’d be quite disappointed if you tried to drench a plate of piping hot pancakes with the liquid that comes straight from the maple tree.

The deliciously sweet syrup requires about 45 gallons of tree sap to cook up one gallon of pancake-worthy goodness, according to the Indiana Maple Syrup Association.

“During the Maple Syrup Festival on our farm, we take groups of people out into the woods and explain to them the manufacturing process,” says Emily Blackman of LM Sugarbush, a maple syrup farm in Salem that she owns with her sister and their respective husbands. “Between 50 and 75 percent think you collect syrup from the trees, and they don’t realize how much labor goes into it.”

The trip from tree to table mesmerizes most, and a bit of explanation helps consumers further appreciate the price paid for a bottle of real maple syrup. Indiana syrup-maker Tim Burton recalls his first exposure to maple sap harvest with a former co-worker. The experience inspired him to go home, count maple trees on his farm and start a syrup business.

“I was enamored by the whole process, and it was so primitive,” says Burton, who owns Burton’s Maplewood Farm in Medora. “You’re taking sap from a tree, and boiling it and boiling it. The water evaporates and the sugar content is left in the pan, and you have maple syrup.” 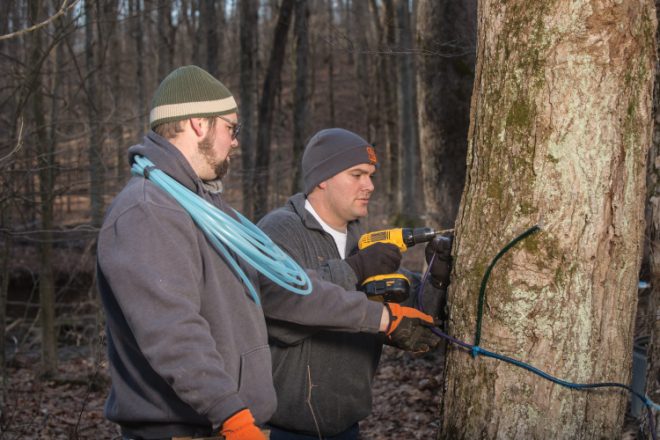 Every January, Blackman’s family drills small holes to install nearly 4,000 plastic spiles (a small spigot) in about 2,500 maple trees, collectively known as the “sugarbush.” While some farms may use hood-covered buckets to collect the sap, these second-generation syrup-makers “milk” the trees. They attach food-grade tubing to the spiles and use a vacuum pump to draw sap, which flows into holding tanks. The family then transports raw sap – essentially water with a distant sweetness – to the sugar house for processing.

Harvest takes about five to eight weeks, beginning in January and going through March. Maple sap flows when nights fall below freezing and daytime temperatures reach the 40-degree range.

“We still make syrup the old-fashioned way with a wood-fired evaporator,” says Blackman, whose family balances the seasonal syrup venture with full-time careers. “We manually tend to the fire and make sure it’s the right temperature, and we cut all the wood. So, it’s a very labor-intensive process.”

After the sap boils down to syrup, the family filters the product to remove impurities and then bottles it. 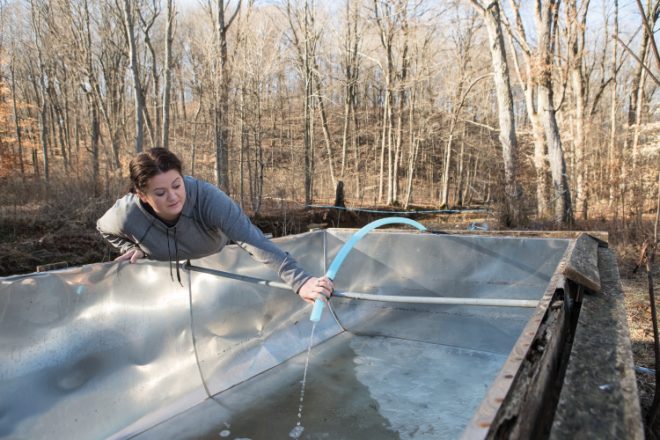 Emily Blackman of Sugarbush Maple Farm checks the water from a tap line.

From the sugar house on their farm, Burton and wife Angie sell more than 3,000 gallons of maple syrup annually to hotels, restaurants, gourmet chefs, retail stores, breweries and major farmers markets throughout the U.S.

“The biggest thing I hear is, ‘Oh, I thought maple syrup was only made in Vermont,’ ” says Burton, who founded the National Maple Syrup Festival held annually in Brown County. “Right behind that is, ‘I didn’t know Indiana made maple syrup.’ ”

Indiana syrup-makers produced 12,000 gallons of maple syrup in 2016, according to the National Agricultural Statistics Service. While producing only a fraction of Vermont’s nearly 2 million gallons, these Indiana farmers maintain a loyal customer base and proudly kick off commercial maple sap harvest as the state furthest southwest in the U.S. “Maple Belt.”

Quality syrup and innovative syrup products allow the Burtons to successfully tap into a market dominated by northeastern states and Canada. Featured on Feast TV and the Martha Stewart Show, the syrups at Burton’s Maplewood Farm showcase uses beyond pancakes, waffles and crepes. In particular, the farm’s unique barrel-aged maple syrups flavor anything from main courses to desserts, whether a salmon dish, caramelized onions to garnish a burger, or ice cream.

He pours maple syrup into used bourbon, brandy, whiskey and rum barrels and proceeds to heat the barrels by wood fire to release the flavor of the spirits embedded in the wood. “We get these spent barrels and chase the ‘Devil’s Cut’ into the syrup,” Burton says. 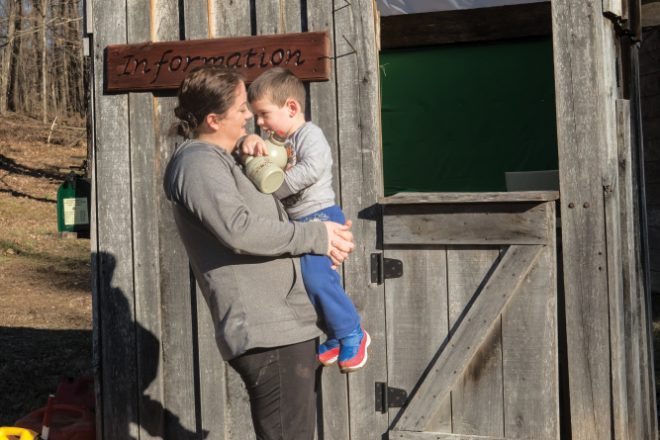 The novel process and resulting syrup flavors prompted a signature syrup line for Virgin Hotels in Chicago and a place at Oprah Winfrey’s farewell brunch, he says. Meanwhile, his syrups sell at about 35 big-city farmers markets throughout the U.S. as well as through the farm’s online store at burtonsmaplewoodfarm.com.

The folks at LM Sugarbush sell much of their 800 to 1,000 gallons of annual syrup production at their farm festival. They also serve a following of loyal mail-order customers, online patrons at lmsugarbush.com and regional retailers who buy syrup in quantities of 8 ounces to 1 gallon.

“I think the demand for maple syrup is going to greatly increase and continue to increase as people are looking for healthy alternatives for sweetener products,” Blackman says. “That will continue to drive our business. I don’t think we will be slowing down anytime soon.”