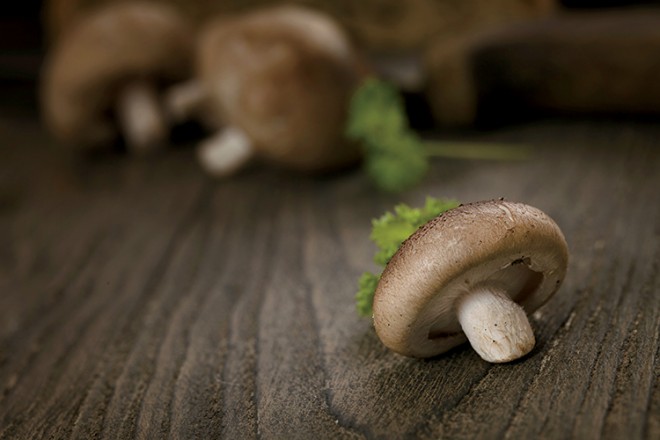 Mushrooms may not fit most people’s conception of a “crop,” but they are the only crop for Eric Osborne, owner of Magnificent Mushrooms in Paoli.

For approximately four years now, the farm has been producing gourmet mushrooms. These aren’t the button mushrooms found in virtually every grocery store produce aisle in the U.S. They are specialty varieties with names that sound either exotic or quaint and folksy: shiitake (his most well-known and most marketed mushroom), oyster mushrooms (ink, yellow, gray, white and blue varieties), reishi, lion’s mane, wine caps, turkey tail and king oyster.

“The maitake, the hen-of-the-woods, is really the next on my list to grow,” Osborne says. “It’s really difficult to grow but … it’s so good for you, so good for the body, the immune system, and it’s delicious and huge.”

As of late summer 2014, Magnificent Mushrooms was producing 50 to 75 pounds per week. However, it was at that time beginning a significant expansion that, if all goes well, should result in a yield of 200 pounds per week in its first phase, Osborne says, and up to 600 pounds per week once the expansion is fully implemented.

From Forest to Fork

“Within Kentuckiana – between Louisville and Bloomington – I feel pretty confident that I can get rid of (that is, sell) 600 pounds per week,” he says.

Restaurants in the Kentuckiana area are Osborne’s primary market, but for him, mushrooms are both a business opportunity and a passion. Part of his commitment to mushrooms comes from his belief in their nutritional and possible therapeutic qualities, but it also comes from a conviction that mushrooms are important – to humans and to the planet on which humans live.

“It’s proposed that mushrooms are like the Internet of the earth – I would agree,” he says. “That’s how I see it. Mushrooms transfer information across acres of forest. Ninety-five percent of all plant life has some physical relationship with fungus.

Although all of Osborne’s mushrooms except the wine caps are produced in Magnificent Mushrooms’ growing house, Osborne says he varies his output somewhat depending on the season to reduce heating or cooling costs, and also reduce the impact on the environment.

All except the shiitakes are native to Indiana, he notes. 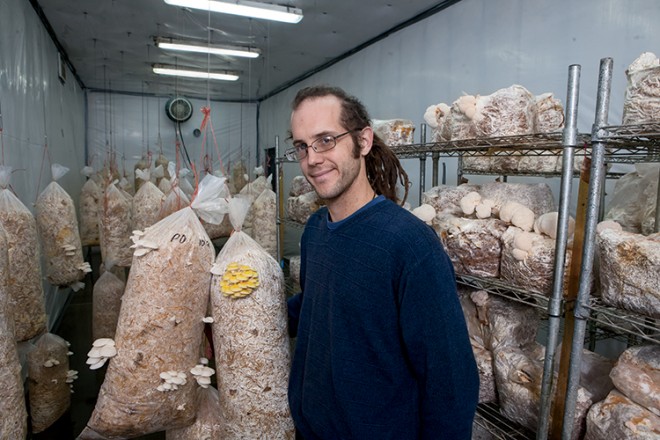 Osborne, who has a master’s in education, taught language arts in Louisville for several years. He got interested in mushrooms 17 years ago when a “fairy ring” (mushrooms that spontaneously sprout in a naturally occurring circle) appeared in his yard. That led him to a book by the “mushroom guru of the West,” Paul Stamets.

“And when I read it, I just felt in my heart of hearts that what my job was supposed to be was growing mushrooms,” he says.

It became, well, not really a hobby. “This thing took over my life pretty much immediately,” he says.

He sees mushrooms as not only delicious by themselves, but also as a way to extend meat purchases and diversify your diet.

Osborne moved to the farm on which Magnificent Mushrooms now resides in 2009, commuting to his school in Louisville and fitting his mushroom work in wherever he could. A year later, he quit teaching to become a full-time mushroom grower.

Osborne continues to teach by offering workshops in growing and cooking with mushrooms as well as identifying wild mushrooms – he is certified by the state to identify wild mushrooms. 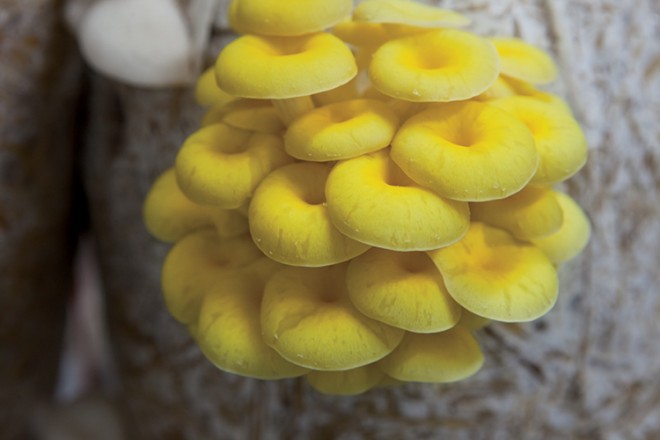 He also works, to a certain extent, with the Nashville-based Hoosier Mushroom Society. Stephen Russell helped form the group in 2009 with the mission of promoting the science of mycology and the study of fungi. Today, the club leads forays, or guided hikes with mushroom identification experts, through wooded areas such as nearby Brown County State Park. To learn more, check out the group’s website at hoosiermushrooms.org.

In addition to workshops, Osborne also hopes eventually to create an educational center on the farm as an additional way to share his knowledge of all things mycological.

“Looking where we are, and seeing how far it’s come – I’m so, so grateful,” he says. “And I want to be able to share the love with people. Mushrooms have really enhanced my life. They really have. The quality of my life has been improved because of engaging with this thing. I encourage other people to do the same.”