When Joe and Amy Kelsay met as teenagers at the 1995 Indiana State Fair, they had no idea the romance that bloomed from that first encounter would find them married and running a busy dairy farm and agritourism business in Whiteland 15 years later. 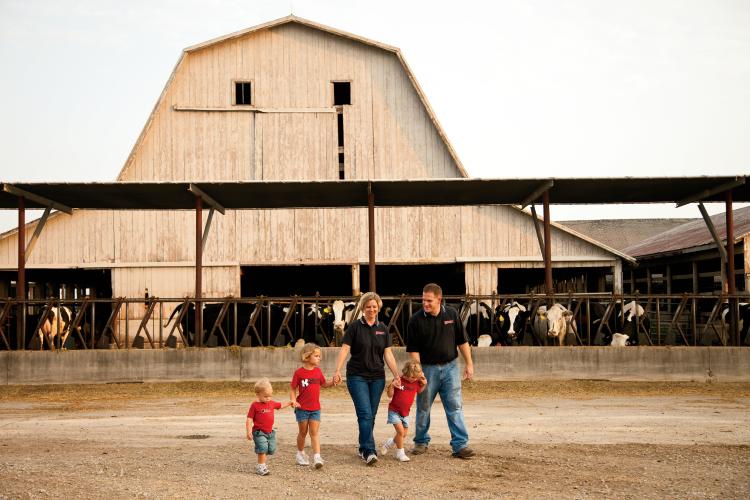 Today, Joe (a former state FFA officer) and Amy (a former state 4-H representative) are raising their three kids – 6-year-old Jenna, 4-year-old Josie and 22-month-old Jack – two miles from Joe’s family’s 2,200-acre dairy farm. Established in 1837, Kelsay Farms is a sixth-generation family farm, with three of those generations currently working on the land – Joe and his brother Russ; their father, Merrill, and stepmother, Debi; and grandmother Ruth. Joe also serves as director of the Indiana State Department of Agriculture.

“Joe and I both went to Purdue University. He got an agriculture economics degree, and my bachelor’s degree is in animal science,” says Amy, who grew up on a small grain and hog farm in southern Vigo County.

“Our kids love being on the farm and keeping up with how many cows we have on any given day,” she says. “We average two baby calves born a day, so they love getting a chance to help bottle-feed.”

From Family Farm to Agritourism Destination

Until a few years ago, Kelsay Farms was doing business as usual – milking 500 Holstein cows three times a day, growing corn, soybeans and hay, and giving the occasional farm tour to a curious group of school children. But when the Kelsays’ first daughter was born and Amy became a stay-at-home mom, she realized the family was missing out on a big opportunity to teach the public about agriculture.

“I have a passion for youth education, and I love young people,” Amy says. “We had been giving farm tours for nearly 30 years, but I wanted to grow that side of the business and develop the educational aspect.”

In 2007, the Kelsays launched Kelsay Farm Tours LLC, an agritourism business that sent the number of visitors to the farm into orbit. They beefed up the tour experience for student and scout groups to include an in-depth look at the milking parlor and a class in a barn where they learn about dairy nutrition. The farm hosted nearly 10,000 visitors and students in 2009. 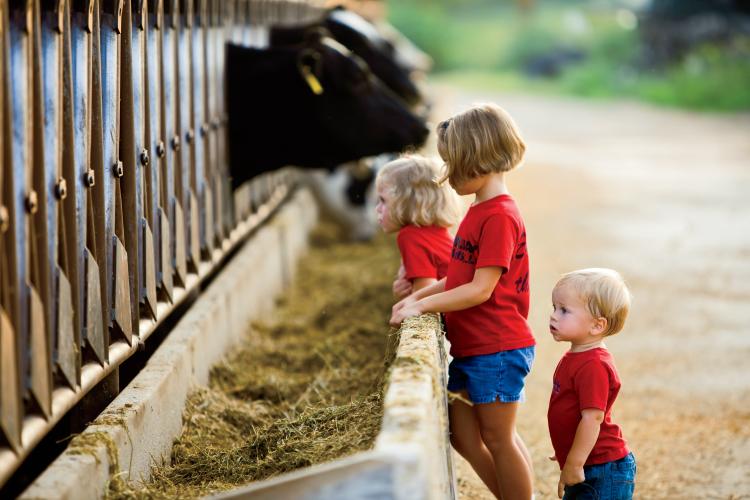 What Teachers and Students Can Expect

“Students are here for an hour and a half, and during that time they learn about why milk is good for you, the importance of getting three servings of dairy each day, what dairy foods are, and why calcium is important for them as students,” Amy explains. “Many children today don’t have the opportunity to be on a farm, so they really enjoy themselves. And they leave with a much better understanding of what dairy farming is all about.”

Spring and summer tours are limited to student groups, but come October, Kelsay Farms is open to the public on weekends for guided farm tours departing every hour, rides on the Moo Choo Express train, a 5-acre corn maze, hay rides, a pumpkin patch, a straw bale climbing mountain and other family-friendly activities.

“Kids love to climb on the straw bale mountain. It’s like a straw fort with tubes, tunnels and slides,” Amy says. “We also have an indoor corn crib with diggers and toys. They can practically swim in it. We basically took the things my husband and I enjoyed doing as kids on the farm and recreated them.”

Guided tours take visitors through the milking parlor and teach them about new technologies used on the farm. When visitors get hungry, they can head for the farm’s snack bar for chocolate milkshakes, ice-cold milk and juicy cheeseburgers.

“We are lucky to have several neighbors who are also involved in agriculture,” Amy says. “We sell cheeseburgers made from beef produced by another local farmer who lives less than a mile from us. And the pumpkins, gourds and mums we sell are also grown by our neighbors.”

In 2010, the Kelsays are adding a new toddler play area with ride-on tractors and other farm-themed play equipment.

Amy says the reason why the Kelsays love what they do is simple.

“It all comes down to the fact we feel so blessed that we can farm, because there aren’t many folks today who do it anymore,” she says. “We feel it’s our responsibility to educate people about farming and let them see it firsthand.”