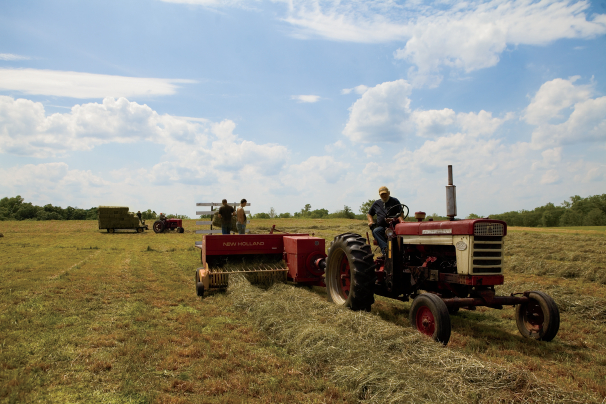 As a child, Patty Naegele rarely thought about her ancestors who, with only a wooden plow and teams of oxen, cleared land on her family’s 120-acre farm in Jefferson County in the early 1800s.

Today, Naegele remembers that legacy each time she visits her family’s homestead near the Ohio River. In March 2012, a plaque designating the farm as a Bicentennial Hoosier Homestead was awarded to Naegele and her brothers, Tom and Bill Matthews, the farm’s current owners.

Their parents, Thomas and Virginia Matthews, applied for and received a Hoosier Homestead Award in 1990. At that time, only one category honored farms that had been in the same family for 100 years or longer. Since then, sesquicentennial and bicentennial categories have been added.

According to deeds in the family’s possession, the Matthews family’s history with the farm began in 1811, when a land claim was staked by Daniel and Nancy Robbins. Ownership of the land was officially transferred to the couple the following year.

“Verbal family history claims the farm was sold to the Robbinses for $1.25 an acre,” Naegele says. The purchase may have been a wedding gift for daughter Elizabeth Matthews. Census records state Elizabeth and her husband, James, moved to the Indiana Territory from Pennsylvania and were the first to settle the farm.

James P. Matthews, a descendant of the original owners and a Civil War officer, is credited with building the two-story house on the property that still serves as the family’s homestead.

“We think the original house, sawed from poplar trees on the farm, may have been a cabin with four rooms, two up and two down,” Naegele says.

Additions have been made to the home over the years, with the last being a kitchen and porches by Naegele’s grandparents in the 1950s.

In 1817, the family donated a lot on the northeast corner of the farm to the Carmel United Presbyterian Church, which remained active until 1928. During the 1940s, the building was torn down and the lot deeded back to the farm. The church cemetery, adjacent to the farm, is still used today.

A schoolhouse was built on the opposite side of the farm on a tract of land the owners donated to Hanover Township. The school eventually closed, and the lot reverted back to the farm. While the family does not have exact dates when the school was operational, they do have proof of its existence.

“When the school was dismantled, it was reconstructed near our farm buildings,” Naegele says. “Today, that building is used for machinery storage.” 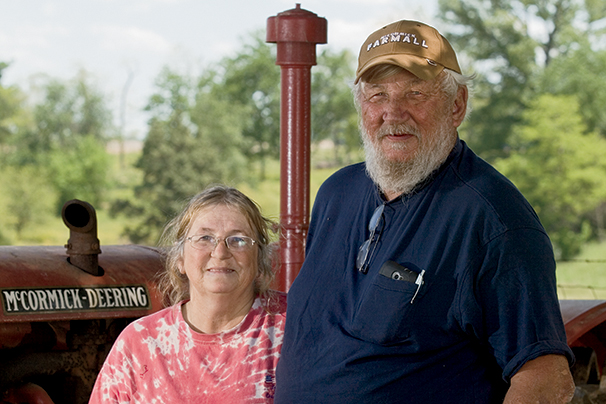 Tom Matthews and his wife, Vicki, moved to the farm in 2010. A few things have changed since his parents passed away. While Thomas Matthews raised beef cattle and hogs, Tom Matthews limits his livestock to horses. He still plants soybeans and corn on the farm’s 82 tillable acres, but he has stopped growing alfalfa. “There just wasn’t a market for it,” he says.

The wooden pegs in the cattle barn reflect the farm’s early heritage, though steel nails peek out as reminders of modern maintenance.

As one of the first farms in the state to be honored with a Bicentennial Hoosier Homestead award, the Matthews farm has staked its claim as being one of the state’s oldest tracts of privately owned agricultural terrain. Naegele believes the seven generations of owners and six generations of family who have lived on the property would be proud of the effort their descendants have put into recognizing their ancestors’ work and perseverance.

Naegele also hopes her family will continue to see the land as valuable for its heritage and sentimental value. “We’ve got roots here and I can only hope future generations will be interested in keeping it,” she says.

Her brother Tom is more definite about the farm’s future. “This property is something to be proud of,” he says. “We’ll do our best to keep it in the family.” 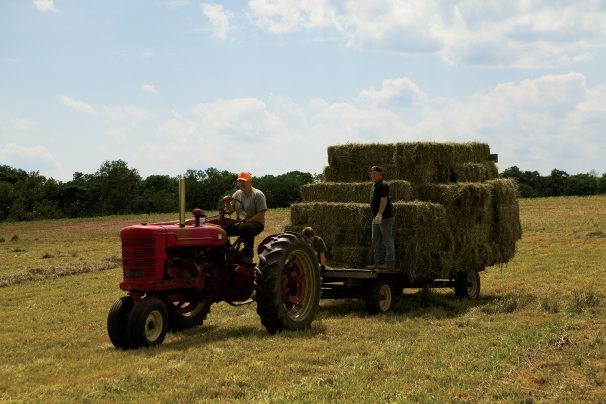 The Indiana State Department of Agriculture has facilitated the Hoosier Homestead Award program since 1976. Originally it honored farms in Indiana continuously owned by one family for a minimum of 100 years. Beginning in 2004, sesquicentennial and bicentennial awards were added, recognizing farms with 150 and 200 years of ownership, respectively.

Two annual programs recognize these Hoosier families. The spring ceremony is held at the Indiana Statehouse, while the State Fair hosts the second. Lieutenant Gov. Sue Ellspermann officiates at both programs. Each family receives a certificate of recognition and the names and history of each family. The certificates are signed by the lieutenant governor and include the Indiana state seal. There is no cost for the certificate, though a plaque, which denotes the same distinction and is made to withstand inclement weather, costs $31.

To qualify for Hoosier Homestead Award a farm owner must:

More than 5,000 farms have received the Hoosier Homestead Award in the past 30 years. For a list of award winners from the past three years go to in.gov/isda.