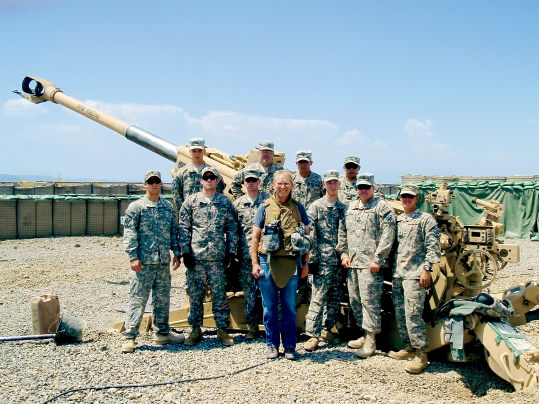 The ADTs are elite units. Typically composed of National Guard citizen-soldiers with agricultural backgrounds, the ADTs have received agricultural assistance from Purdue University’s Afghanistan Program and language and cultural training from Indiana University.

Security is a constant concern in this tumultuous war zone, where buried bombs, ambushes and suicide attacks are daily threats. The ADTs accordingly travel on aid missions in massive armored gun trucks, protected by heavily armed security soldiers. In some cases, the only way to get to meetings with tribal elders in Taliban-controlled areas is by helicopter.

After more than three decades of war, Afghanistan is plagued by poverty and a woefully deficient rule-of-law. Over the last few years, Transparency International has ranked Afghanistan as one of the world’s most corrupt countries, complicating the ADTs’ mission of binding the Afghan people to their government.

In spite of the numerous challenges, the Hoosier farmer-soldiers have made an impact. A Department of the Army Meritorious Unit Commendation noted the Indiana ADT “greatly increased the regional government’s capabilities while simultaneously improving the lives of the Afghan people.”

The commander of the 5-19th, Lt. Col. Dave Roberts, has a farm near Madison. Roberts says the Afghans were “very receptive” to the ADT once they understood they were farmers talking to farmers.

“They knew we had true, true farmers who had knowledge we could share with them,” he says. “That was a good feeling.”
As of My Indiana Home’s May deadline, it was unclear what will happen with the sixth Indiana ADT, which has been training for deployment to Afghanistan. The team has orders to deploy to Afghanistan, but it is apparent they will not be going to Khost Province. The unit may be deployed elsewhere in Afghanistan.

About the Author
Freelance journalist Douglas Wissing of Bloomington was embedded with the 5-19th Agribusiness Development Team Jan. 2-9, 2013, and has been providing reports on the unit’s mission and progress to the Indiana Farm Bureau. A special unit of the Indiana National Guard, the 5-19th and the four ADT units that preceded it have been working in Khost Province, Afghanistan, to help Afghan farmers rebuild their farm and agribusiness sector. Wissing was earlier embedded with the Indiana ADT in spring 2009 and again in late 2009. You can find out more about Wissing and his other writing projects at douglaswissing.com.